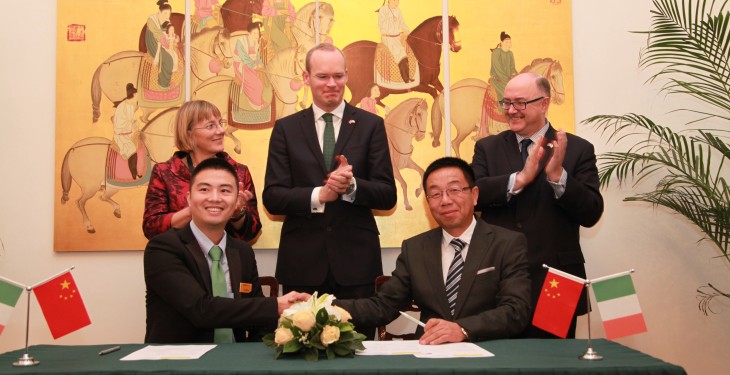 One of the most glaring distortions within the Irish food trade delegation visiting China this week is the total lack of representation from the IFA. A cross section of other farming organisations are represented – but not Ireland’s foremost agri lobby group.

And that’s a pity, as the seven-day schedule of engagements is providing our farming industry with a unique opportunity to show case what we do best in this country and that is producing high quality food.

I know the IFA has lots of priorities at the present time, chief among them being the challenges facing the beef sector. But, surely, given the significance of this week’s trade mission, someone from the organisation could have been earmarked to attend?

The initiative has served to highlight just how important China will be for Ireland agri food Inc. To date, it has been nothing but a good news story for the Minister for Agriculture, Food and the Marine Simon Coveney, Bord Bía, the Irish Dairy Board and the myriad other organisations represented on the trip.

Monday saw the Minister secure agreement from the Chinese authorities that all Irish red meat plants will be officially inspected by government veterinarians from China at the beginning of next month. This should allow Irish beef entry on to the Chinese market before the end of June next year.

Tuesday was marked by the signing of a Memorandum of Understanding between Bord Bía and the Chinese Dairy Association, an accord that should help pave the way for a substantial increase in dairy exports from Ireland to China.

The highlight of Thursday was the launch of the new Green Love Plus infant formula brand, involving Kerry Group and its Chinese retail partner, the Beingmate Group.

I sense the IFA knew that all of this was coming down the track, as its staff had been involved in the preparations that were put in place for the trade mission. In fact, as far as I am aware, Eddie Downey was scheduled to depart with the group going to China but cried off late last week.

To come back to my original point: surely someone from that organisation should have been free to take part in what has turned out be a stunningly successful initiative for Ireland’s agri food sector?

It was strange to hear the Minister Simon Coveney referring to the fact that Ireland’s farm organisations is an integral part of the trade mission at all his public engagements this week and there being no one from the IFA in the room to hear him speak.

Protesting is one thing – but surely Ireland’s leading farm lobby group should also be on hand to endorse a genuinely good news story for Irish agriculture and our economy as a whole.