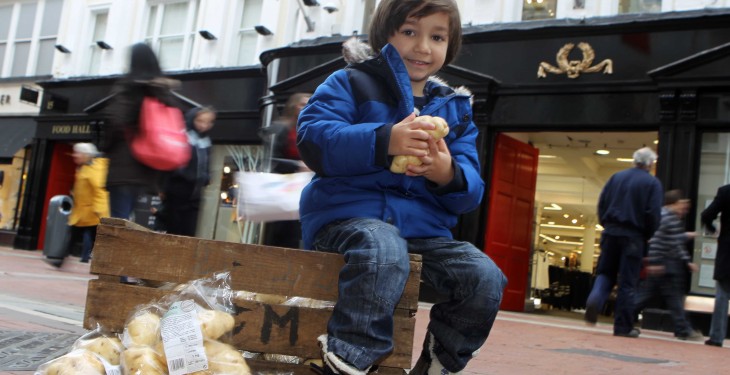 This week Glens of Antrim Potatoes and Marks & Spencer Ireland celebrated the arrival of a new batch of Irish Lumper potatoes to stores across Ireland, to meet demand from shoppers around the country.

The 170-year-old potato was brought back to life by county Antrim farmer, Michael McKillop earlier this year, sparking global demand and stirring up worldwide debate about its history. With stores selling out in a matter of weeks, McKillop and his team have worked hard to harvest a new batch of the famous spud that land in M&S Ireland next week.

The Lumper potato, which gets its name from its knobbly appearance, had not been commercially cultivated since the potato famine in the 1840s when it was virtually wiped out, until Glens of Antrim brought about its resurrection.

Speaking to AgriLand McKillop commented: “The Lumper was a thing of the mashed, roasted, and baked potato past until about five years ago when I got my hands on some heirloom seeds and cultivated them. I chose the strain because of its history and unusual look and feel.

“We are thrilled to be able to supply M&S with a new batch of the potato and hope that customers who haven’t yet tasted a piece of their history will give them a try and let us know what they think by posting comments on our Facebook page.”

Conrad Digan, head of selling and marketing at Marks & Spencer Ireland, commented:  “When we first introduced the Irish Lumper potato to our M&S stores earlier this year, it proved a big hit with our customers.  Due to popular demand, we are delighted to announce that it will be returning to our shelves later this month just in time for Christmas.”

Glens of Antrim Potatoes is a family-run business in its 41st year of operation based in the rural town of Cushendall in Co Antrim.