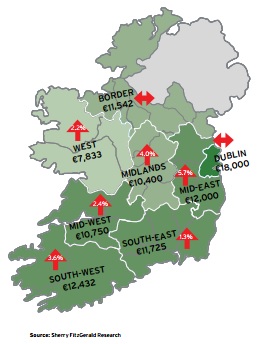 The latest Sherry FitzGerald Agricultural Land Price Index saw the average value of agricultural land increase by 1.8% in the first half of the year, to stand at approximately €9,500 per acre.

Sherry FitzGerald reports that the opening six months of the year witnessed somewhat mixed performance in the Irish agricultural land market. Following a robust opening quarter in terms of price performance, the pace of growth moderated during the second quarter.

It says price trends in the second quarter reflect a market that is stabilising, rather than appreciating akin to the growth in the Irish residential market.

The well-known estate agent says its regional analysis of land prices reveals diverse performance during the opening half of 2014.

The Midlands region leads the recovery in terms of price growth and experienced the most notable rise in average land values of 4.1% in the year to June 2014.Land values in this region increased from approximately €7,700 to €8,000 per acre in the six month period.

Other significant increases were evident in the Mid-East of 3.8% and in the South West, 3.5%. However, the South-East, the West and the Border regions witnessed downward pressure on land values, albeit modest, in the six month period. 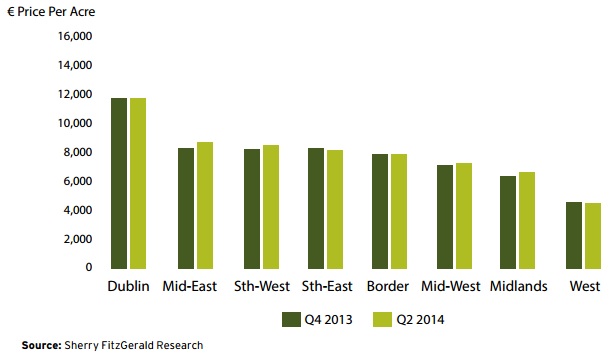