“It doesn’t take a bad person to bring in disease into a country – it just takes a careless one,” Northern Ireland’s chief veterinary officer told AgriLand.

Unfortunately, while the region is always prepared for exotic diseases, the sentiment sums up how little it takes for a minor mishap to turn into a full-blown outbreak – regardless of where you are in the world.

While the UK has just rounded off on an intensive Foot and Mouth preparation exercise – Exercise Blackthorn – the region’s most senior vet, Robert Huey, said there were other diseases which proved a bigger threat.

African Swine Fever – a highly contagious viral disease affecting pigs – was among those on his radar.

He explained he had been tracking the disease as it made its way across the European continent.

“My biggest worry about exotic disease is not actually Foot and Mouth disease at the moment – it’s African Swine Fever,” he said. 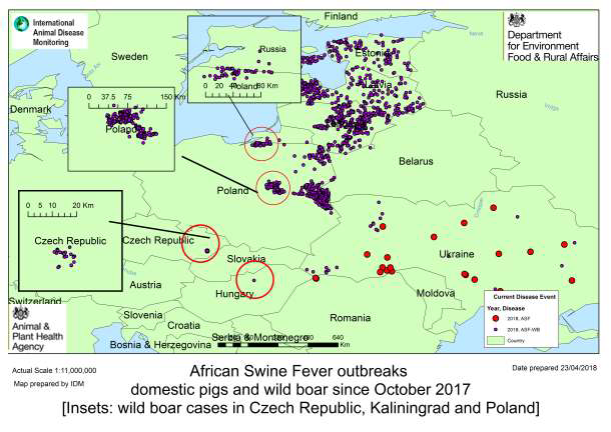 “If we get African Swine Fever here it could wipe out the entire pig industry in Northern Ireland – if not the island.

“It got to Hungary last week; it has been in Russia, Ukraine and the Baltic states for some years now, and in the last few months it has entered the Czech Republic too.

It is travelling in wild boar – once you get a disease like that into wildlife it is a real difficulty and it’s hard to do something about it.

“We were testing Foot and Mouth disease responses, but it equally could have applications for Swine Fever,” he said.

The virus is particularly difficult to halt as it survives both cooking and curing and is a major concern to large pig-producing countries Germany and Denmark.

Over the space of 10 years, more than a million pigs were lost to the disease in Russia.

It’s thought the disease was brought into the Czech Republic after hospital workers from Ukraine brought some traditional sausages back home with them.

“Somehow it found its way into the waste of the hospital and that was being used for swill to feed pigs,” Huey said.

So the disease made its way over 1,000 miles in a sausage in someone’s hand luggage, which they took in their lunch to work.

“They put the remnants of their lunch into the waste, which was then used for feeding animals; the swill wasn’t properly boiled, the virus survived and it led to an outbreak in the Czech Republic, which has had quite a devastating effect.”

Huey said the disease has such devastating effects that an outbreak in the late 1970s saw every pig in Malta killed.

In March 1978, an outbreak of African Swine Fever occurred in Malta. The disease spread rapidly and by April 13, the disease had been found on 304 premises involving 25,100 pigs.

A census carried out just a couple of days later, on April 15-16, showed that there were at least 1,440 premises containing 70,700 pigs on the island and a slaughter policy was introduced.

By August, the original pig population had been reduced to one-third and a second census taken on August 15-16 showed that a total of 501 owners and 13,975 pigs remained.

The decision was taken to slaughter all the remaining pigs and by the end of January 1979 there were no pigs in Malta.

The outbreak cost an estimated £5 million and became the first occasion when any country had slaughtered an entire species of domestic animal to eliminate a disease.

Exercise Blackthorn: If Foot and Mouth broke out today what would happen?