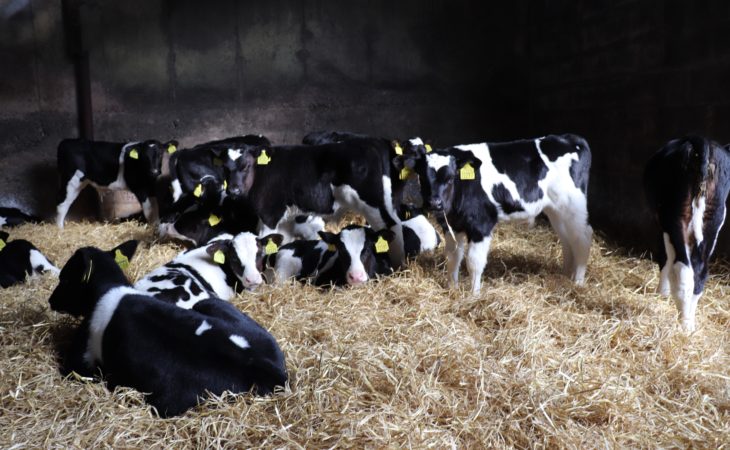 With calving season just around the corner, concerns are mounting that calf rings in marts will soon swell with dairy bull calves.

However, as significant levels of uncertainty continue to linger over the profitability of beef enterprises, some farmers have suggested alternative options for the incoming dairy calves.

Spokesperson for the Beef Plan Movement, Eamon Corley, explained to AgriLand what he believes are viable alternatives for dairy bull calves.

The Beef Plan Movement’s view is that there are three possible solutions:

“For the better quality Holstein Friesian calves, the establishment of veal-type units similar to the ones in Holland would be an option,” said Corley.

He also suggested that a special brand of grass-fed veal is developed.

“This should be attractive because one of the big hangups about veal units in Holland is that the animals are inside and don’t get to see daylight.

“The aim would be that the calf spends the first three months of its life getting milk replacer and ad-lib meal.

After that, it would go out on grass and continue to get meal but also have access to a supply of fresh green grass.

“This would be an appealing product to customers and would be a unique marketing opportunity,” explained Corley. He added that “work on marketing needs to be done”.

Corley explained: “Lower quality jersey-bred calves that really don’t have a market value going forward could be slaughtered in a licenced abattoir. The meat produced can be used to produce dishes such as kebabs.

It would be more humane than putting them down at birth and they would be out of the system – so they wouldn’t cause an issue later on.

The spokesperson for the Beef Plan Movement added that he believes there is no export market for these types of calves.

However, Corley outlined that this system could be met with some issues also.

“Currently, if a calf was slaughtered in the factory, the same department levy would apply to it as an older beast.

“We suggest that this could be brought down to the level of a sheep which would be €0.80/head as opposed to €5.00/head.”

The third option Corley suggested was to ease the regulations that are currently in place with regards to exporting cattle, calves and weanlings.

We are suggesting the introduction of an export refund or an export subsidy. Holstien calves could then be exported to the veal units that’s in Holland.

He drew attention to “an extra problem” that is in place when exporting calves this year.

“Boats must now take a reduced number of calves.

“This is because once they arrive in France, the calves have to be loaded into lairages that don’t have an adequate capacity to hold the number that could potentially be exported.”

Concluding, Corley stressed that a “workable solution” needs to be found.