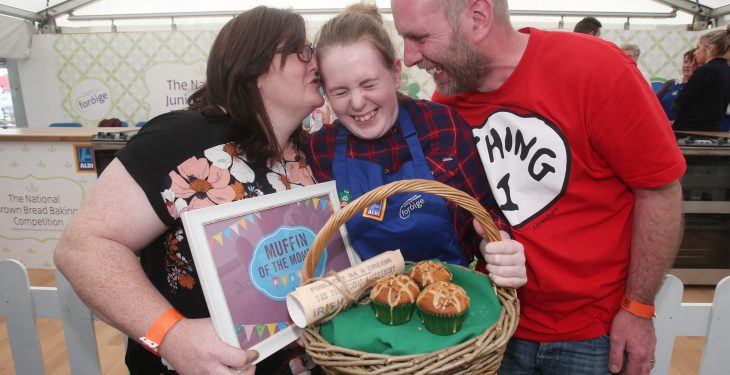 The winner of the 2016 National Brown Bread Baking Competition, sponsored by Aldi, is Phyllis McGovern from Butlerstown, Co. Waterford.

The competition was re-launched by the National Ploughing Association (NPA) two years ago, and is also run in association with the Irish Countrywomen’s Association (ICA).

With entries from each one of the 26 counties, the final was held on the final day of the National Ploughing Championships in Screggan, Co. Offaly.

McGovern was crowned the champion at the Aldi Marquee where she was commended by the judges for her brown bread’s traditional appearance and perfect texture.

Her brown bread will be stocked in all Aldi stores in Ireland for a minimum of six months and during this time she will receive a share of the profits, guaranteed to be at least €10,000.

Meanwhile, Eabha Campbell of Truagh, Co. Monaghan retained her title in the National Junior Baking competition for a second year in a row.

The junior competition was also sponsored by Aldi and is run in association with Foroige and the NPA.

The 16-year-old, won a group trip for her oclub to Delphi Adventure Centre, and a €1,000 bursary fund for herself. Her muffins will also be stocked in all 126 Aldi stores nationwide.

The theme this year was ‘Muffins of the Moment’, and Campbell baked spiced fruit muffins with a 1916 theme which the judges described as outstanding.

County and regional finals were held nationally through Foroige, before the semi-finals and final were held in the Aldi Marquee at the ploughing.

Aldi Ireland has a three-year partnership with leading youth organisation Foroige, who works with over 54,000 young people aged between 10-18 years old across Ireland.