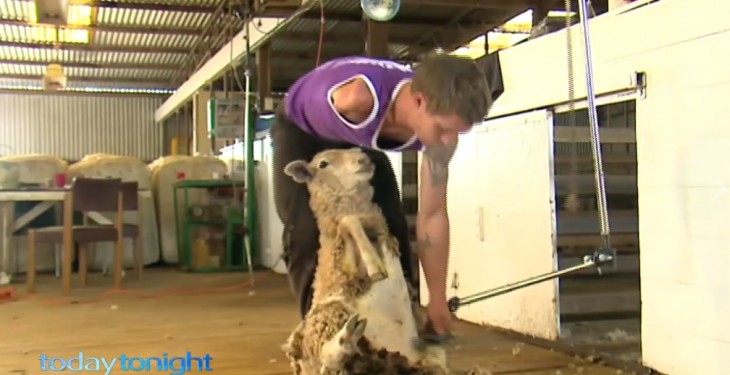 A sheep shearer in Australia has managed to teach himself how to shear a sheep one-armed after an car accident in 2008 left him with only one arm.

Josh Talbot speaking on Australian show Today Tonight said that while he was out driving, he took a corner on the road a bit wide and the back tyres hit the gravel and sent him into a sideways slide.

“I was pretty much sliding the whole way.”

The reporter in the video says that the car then rolled several times and slammed into a tree on the side of the road.

“I got thrown out of the car and flew through the top of the tree.” He then woke up two weeks later in the Royal Adelaide Hospital.

My first words I think were ‘well there goes my shearing career’.

“I’ve sort of always been a person that if someone tells me I can’t do something I like to get out and prove them wrong.

“I’ve been told a few times it might be a bit hard and I mightn’t be able to do it so I went out and proved them wrong.”

Speaking in the video is Josh’s mother Roz, who said he was only home from hospital two days and he made her take him out to the shearing shed where he managed to shear half a sheep.

Roz, an ambulance officer, was also the first on the scene following the crash. “I kind of had a gut feeling that it was him anyway before we left and when we pulled up it was his car around the tree. I just hopped into ‘ambo-mode’ and did what I has to do.”

She also said that he died twice on the night of the accident but he was resuscitated back to life.

Josh said that he was a right-handed shearer to start with so he had to learn to do it all backwards. Now, it’s pretty much all in the legs, he said.