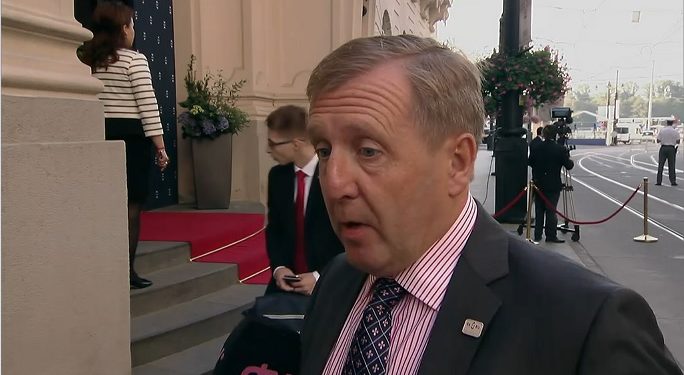 The Minister for Agriculture has not confirmed whether the Irish Government will be co-financing the EU Dairy Aid Package agreed in July.

When questioned on the matter in advance of an informal meeting of EU Agriculture Ministers in Slovakia this morning the Minister remained tight-lipped on the subject and said only that the Department of Agriculture was ‘working on it’.

As yet there has been no clear signal as to whether the Government will stump up the money for dairy farmers and it is notable that Minister Creed had to date stayed quiet on such a move.

This is despite significant pressure from farm organisations for the Government to 100% co-finance the €11m allocation from the EU and increasing the fund to €22m.

The use of Irish Exchequer funds for a new dairy scheme will require sign off from the Departments of Finance and Public Expenditure which as been described by one source as ‘not a forgone conclusion at this point’.

On the Milk Reduction Package, Minister Creed said Ireland were obliged to make it available and said “it remains to be seen what the level of take-up will be”.

“Obviously we are emerging from a post-quota era and we are anxious to reach our full potential in the dairy industry notwithstanding the fact that it is a volatile industry commodity prices go up and down.

Today’s informal meeting of EU Agriculture Ministers will discuss all aspects that have an impact on the farmers’ position in the food supply chain.