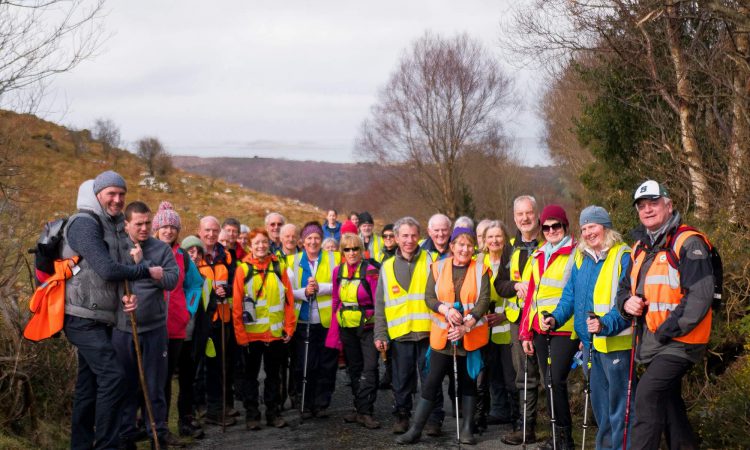 The Croagh Patrick Heritage Trail three-day walking festival will take place on March 13, 14 and 15.  All proceeds go to Croi, the heart and stroke charity.

A 63km walking trail, it was founded in 2009 by the Tochar Valley Rural Community Network (TVRCN). The emphasis of the project was to generate local income for small farm holdings and the local community, between the villages of Balla and Murrisk in Co. Mayo.

Back in 1997, a survey was commissioned for Teagasc which discovered that only 7% of farms in Co. Mayo were found to be viable and it highlighted the importance of off-farm income in the future.

With this in mind, the TVRCN looked locally to pinpoint what could be done and saw the opportunity to showcase the rich beauty and heritage of the local communities through the formation of a heritage trail. Once a feasible route was identified, the development of the trail was initiated.

Sr. Maureen Lally recalls climbing ditches and falling into bog holes while she and fellow founders tried to map out a suitable walking route.

This involved creating a partnership with the local landowners, to allow the trail to pass through their land. With this in place, local people were invited to go out and interpret the local heritage along the trail.

Pauline Dixon, co-ordinator, Clogher Environmental Group, said that money is generated locally by people staying and eating in the area, and from the sale of organic produce on the trail.

“Sr. Maureen is very much still involved with a very hands-on approach, not to mention her baking abilities with brown bread and treacle cakes that our walkers enjoy over the three days.

“She fries up the black and white puddings that are generously donated by Keans of Newport and served on the final day at Campbells pub in Murrisk,” said Pauline.

Pauline along with Brendan Murphy, another development worker, said that the community spirit at the community centre year after year is what helps the festival to be such a success with so many amazing volunteers. Fir Uisce donates water and the cafe in Balla donates scones.

There is just an all-round heartfelt community spirit that is always noted by our walkers.

There are numerous heritage sites along the walking trail. Walkers are treated to an historical trip through time to discover some of the area’s rich heritage.

A mix of archaeological sites are in evidence, with some dating back over 5,000 years, such as the Boheh Stone. This heritage site features a natural out-crop of rock which holds carvings dating back to neolithic times.

The carvings here are said to be very similar to those found in Newgrange, Co. Meath. Twice a year in April and August there is a rolling sun phenomenon where the sun appears to roll down the conical peak of Croagh Patrick. This is said to be best viewed from the Boheh Stone.

From Balla, the trail starts near the Celtic cross dedicated to Patrick Nally, one of the founders of the original GAA who lived close by. Balla was also a mecca for tourism in the 1800s where pilgrims flocked to a holy well there. 15,000 people from all parts of the country visited the area and it only saw a decline after the reported apparition at Knock.

The well is still visible to this day. 9km into the trail is Doonamoona Castle. Built originally by the Normans as an Irish tower house in the early 15th century, it is now a shell that still stands proudly.

Further along the trail is Drum cemetery which dates back to 440 AD when St. Patrick is said to have set up the first church there of wooden construction. An inscribed stone slab with an early Christian cross can be found there.

Further along the walking trail is the village of Ballintubber and with its abbey and historical well. Historical annals reference that the abbey was founded circa 1216 by King Cathal Crovdearg O’Conor.

In the grounds of the abbey is St. Patrick’s Well, where Patrick is said to have baptised his converts in the district, with a stone alongside bearing the supposed imprint of the saint’s knee.

Heritage enthusiasts are also treated to visible ringforts dating to the Bronze Age era. There is a fine example at Knockraha which is located between the villages of Clogher and Ballintubber.

On entering the village of Aghagower, a striking 12th century round tower and medieval church can be seen. The tower was built between 973 and 1013 AD.

St. Patrick is said to have had strong links to Aghagower.

Leaving Aghagower, it’s a straight route all the way to the foothills of Croagh Patrick. Walkers ascend by the skelp before crossing onto the open mountainside to enjoy the uninterrupted views of Clew Bay, all the time being beckoned to the end point, at the pilgrim path on The Reek.

Croagh Patrick has been a ritual focus for thousands of years, as it still is to this day. Thousands of people undertake the climb to the top of the mountain every year with the main day being Reek Sunday, the last Sunday in July.

Whatever the walker’s focus, be it spiritual, holistic or fitness, the trail is a great place to spend a few hours exploring. It’s a fully way-marked route and maps are available on the website. 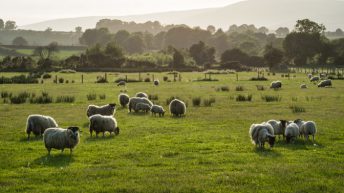