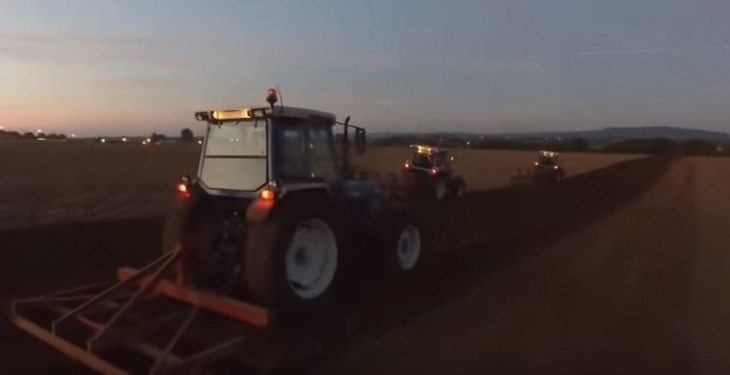 Before winter arrived, the Kanes in Barnhill, Castledermot, Co. Kildare were busy into the night sowing corn.

This great footage was sent to us by Martin Coogan who uses a go-pro and a phantom 3 drone to film the sowing.

Four fully restored Ford 7810s and an 8830 were filmed sowing the corn in October. Coogan said that all the tractors are owned by all the local men that took part on the evening ploughing and sowing the corn, including himself.

“Each tractor was restored by our local ford expert, Brian ‘Benco’ Corcoran.

“Brian has extensive experience from the past number of years in working with Ford tractors and restoring them from start to finish with immense detail.

“Each customer including myself cannot recommend him enough for such good work he carries out.”

Coogan said that the field is owned by Kanes of Barnhill and the field is an 80ac field divided into a number of different crops each year.

“The Kanes are self sufficient from start to finish, there’s great work carried out by Michael Kane and sons Bryan and Niall.

“I was lucky to get such good footage to work with. We filmed this in less than 20 minutes but the lads were very happy with what turned out as in Castledermot “we are major Ford fanatics”,” Coogan said.