Farmers and contractors have been out mowing and baling silage over the past number of weeks with many farmers tweeting their silage photos.

DAD Agri Services, based in Co. Laois were out last week with Joe Bermingham picking first cut silage and Ciaran Byrne was on hand to video their work.

Mowing, tedding and compacting grass in the pit all feature in the video.

Some farmers have finished silage 2016 with Caroline O’Donovan tweeting this shot of the pit covered with tyres. 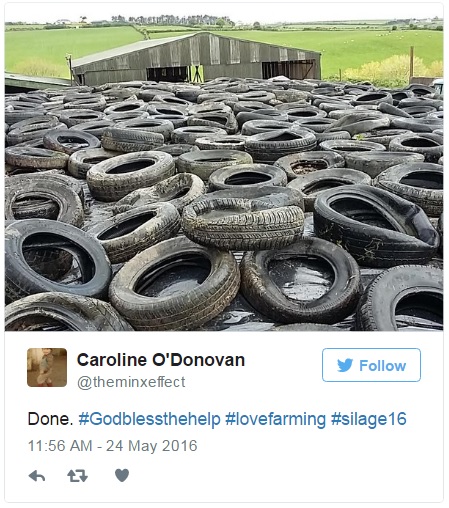 This week will be mainly dry but some showers will push in from the east during the second half of the week, according to Met Eireann.

Overall, it forecasts temperatures of 13 and 18 degrees Celsius, which are average for the time of the year.

Met Eireann says soil temperatures have reached 13 to 15 degrees Celsius and due to sunshine, moisture and warm temperatures, farmers can expect plenty of growth this week.

Wednesday will be a little cooler especially in the north and east. There is also a risk of patchy rain, but most areas will stay dry.

Met Eireann has said that Thursday will bring some showery rain to parts but it is not expected to be heavy and there will be sunny spells also.

Temperatures are expected to reach the mid teens with light variable breezes.

High pressure is set to dominate in the second half of the year, Met Eireann has said, with warmer weather in the high teens expected on Friday. Night time temperatures will reach 9 or 10 degrees Celsius.