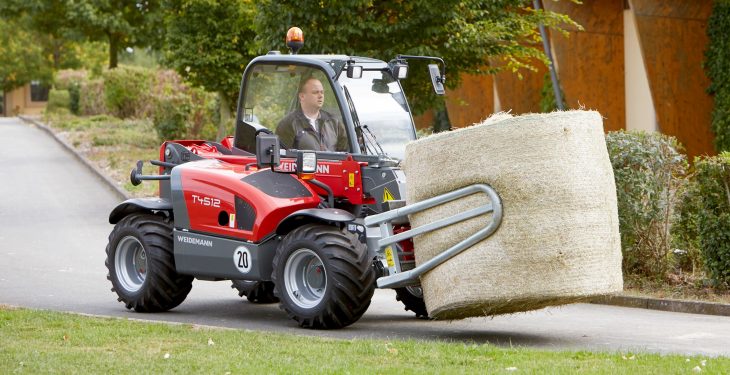 Telehandlers (or telescopic handlers if you prefer) are undeniably useful machines.

In some instances, farmers opt to buy dedicated handlers instead of front loaders for their tractors.

But dedicated telehandlers can be expensive and the initial cost can be hard to justify on many farms. However, a new breed of compact telehandlers is bringing such machines within the reach of more and more farmers. Despite their diminutive dimensions, these small machines are deceptively capable.

The most popular machine on Weidemann’s stand at the show was a T4512 telehandler – a small, ‘compact’ machine but one that O’Boyle says is a “very credible performer on a dairy farm”.

“It is fitted with a 3-cylinder Yanmar. The lower-powered version is rated at 31hp; the higher-power version has 40hp on tap.”

List prices for the T4512 start at less than €40,000 excluding VAT. According to O’Boyle, it’s one of the most most “competitively-priced machines of its type on the market”. Weidemann Ireland has a network of dealers covering the ROI and Northern Ireland.

Carried on a 3.5t trailer

According to O’Boyle, the Weidemann is light enough to be transported on a 3.5t trailer, including a couple of attachments. The machine itself tips the scales at just 2.7t.

Weidemann’s VLS (Vertical Lift System) is one of these machines’ key selling points. The boom can automatically extend out as it’s raised, to keep the attachment in the same vertical plane as it lifts. VLS has won several international awards over recent years. Having operated a T4512, the Agriland team can confirm that VLS is a useful, practical feature.

Otherwise, the T4512 looks broadly similar to other compact telehandlers, with all-wheel steering, a side-mounted cab and a hydrostatic transmission.

The hydrostatic system combines with the brake pedal to provide an ‘inching’ function. This makes it possible to ‘crawl’ forward, until the machine comes to a standstill.

O’Boyle explained, “With the partially-depressed brake-inch pedal , you can drive slowly in ‘crawl speed’ (at full engine rpm) and, at the same time, lift the boom quickly. If the pedal is pressed further, the machine is braked. An added benefit is that it’s not really possible to stall the machine.”

Optionally, Weidemann telehandlers can be out-fitted at the rear with a PTO and 3-point linkage.

At the recent show, O’Boyle also spoke about the outlook for the Irish machinery trade for 2017. With better milk prices in evidence than was previously the case, he expects sales of compact telehandlers to grow. 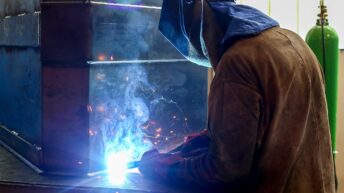 From the farm to the factory…making 3,000 loaders each year