The ExactApply sprayer nozzle is new at SIMA 2017

John Deere’s ExactApply “intelligent” sprayer nozzle and ‘”smart” AutoLube systems are due to receive special awards and merits at SIMA 2017 in Paris.

The ExactApply sprayer nozzle system is claimed to “significantly increase the flexibility and accuracy of spray applications”. It features six nozzles on a rotating turret and two electrically-operated liquid valves.

The system can manually switch between two nozzles and independently control both the spray pressure and the flow-rate at the nozzle.

The nozzles control the flow-rate by using a pulse width modulation (PWM) system, which is said to offer three times the pulsing frequency of conventional systems. This, says the company, enables a much wider variation in spraying speed and application rate.

In addition, says Jon Deere, ExactApply is able to adjust the relationship between the nozzle flow-rate and spraying pressure to apply a less drift-prone droplet spectrum than would otherwise be possible. This is claimed to be ideal for buffer zones or changing weather conditions. 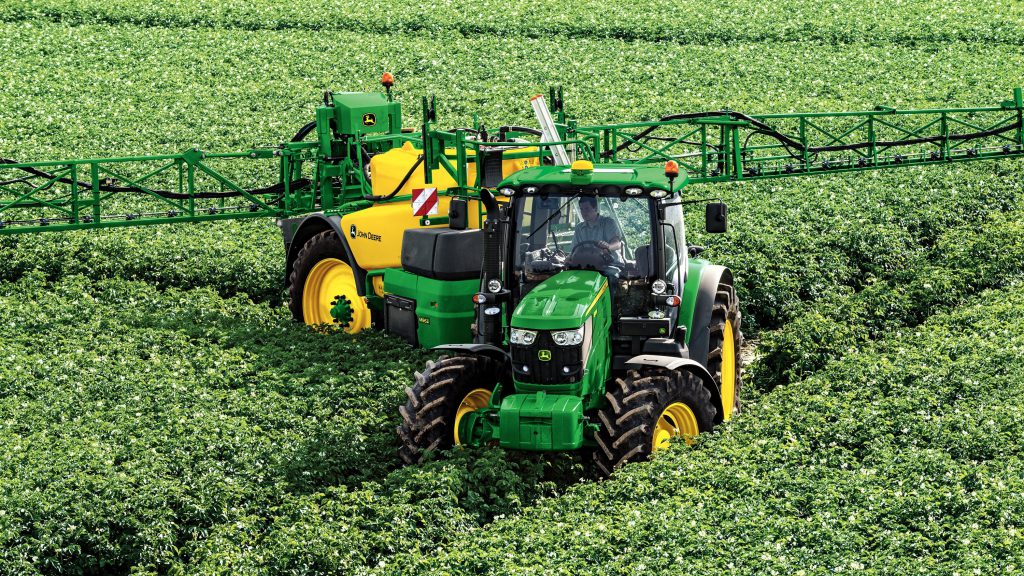 ExactApply is also claimed to increase application accuracy when spraying in curves; the flow-rate at each individual nozzle can be adjusted automatically, to apply less spray liquid through the nozzles on the inside of the curve and more on the outside.

All the nozzles are also equipped with individual LED lights to improve night-time operations and a blockage detection system to indicate interruptions to the liquid flow. Combined with a warning message on the cab display, this promises to make checking nozzles significantly easier for the operator.

A Silver Award, at SIMA 2017, is for John Deere’s ‘Smart’ AutoLube system, which automatically greases all the lubrication points on the tractor along with its ISOBUS-controlled implements.

The system is controlled by the tractor’s CommandCentre Display, where the driver can choose between auto, custom and manual modes. Greasing intervals and quantities depend on tractor usage and loads, as well as the implements used, and targeted lubrication of single maintenance points is possible. The system also warns if the lubricant level is too low.

All operations can be documented and checked via JDLink telematics. For a 6R Series tractor with 1000 operating hours annually, greasing time for the tractor and its implements can supposedly be reduced by 21 hours a year.

According to John Deere, the improved maintenance regime would also impact positively on the machine’s life expectancy, service costs and resale value.

Electric John Deere tractor runs for 4 hours on a charge