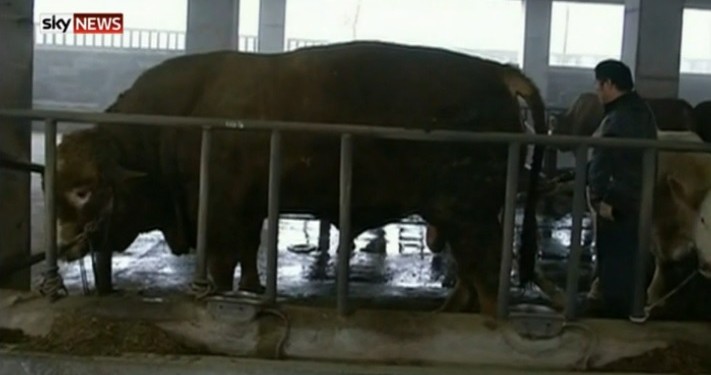 A four-year-old bull weighing 1,887kg has been found in southwestern China and it is reported to be the biggest in the world.

Sky News Australia has reported that the animal is 2.6m long and it has a chest span of 3m.

A news presenter on the channel said that “the beast, which lives in southwest China, is believed to be the biggest in the world coming in at two times the weight of the average bull”.

“The Simmental, a hybrid breed originating in Switzerland is now in line for an award, overtaking the current world record holder by 187kg.

Update: The video appears to have been taken offline, but can still be seen here

Archie, a Dexter bull from Co. Antrim, Northern Ireland, is recognised as the shortest bull in the world by Guinness World Records.

He measures just 76.2cm (30in) from the hoof to the withers, 15in shorter than other bulls of his breed (typically 45in), according to Guinness World Records.

The bull is dwarfed by other animals on the farm including the dogs and goats.

“When we bought Archie, he was destined for beef. However, by Christmas time, he still hadn’t grown and because we had become so fond of him we decided to keep him.

“His size saved his life and now he’s going to live out the rest of his life as a pet,” he told Guinness’.