Blaney Motor Company’s new L1 10-27 compact wheeled loader has entered series production. The concept machine was first unveiled back at the 2016 Balmoral Show – just outside Belfast – in May.

The company is now working to fill existing orders, whilst broadening its dealer network to grow the machine’s appeal. The firm says that it is actively inviting dealers to make contact, in its bid to establish a network of agents to cover the whole of Ireland – north and south.

Launching this machine was a big move for the young business based just outside Ballymena, as it not only involved a new product but also a whole new manufacturing division. The company is now actively building ‘series’ batches of these new loaders, with its sights set on both the farming and construction sectors.

Blaney Motor Company, which is headed up by Sean Blaney, is also home to Quad-X – known for ATV accessories and quad equipment – and Blaney Agri. The latter produces a range of agricultural implements, including mowers, hedge cutters, bale shredders, tipping trailers and aerators.

The key selling point of the new wheeled loaders and telescopic handlers, according to the company, is how compact they are. They weigh less than 3.5t and are “small enough to be transported on a small trailer”.

First up is the L1 10-27; it’s a small, articulated (pivot-steer) wheeled loader with a lifting capacity of 1t and a reach of 2.7m. This machine is powered by a 40hp Yanmar engine, coupled to a 2-speed hydrostatic transmission feeding through a limited-slip differential. Top speed is 20kph. The axles are manufactured in-house. 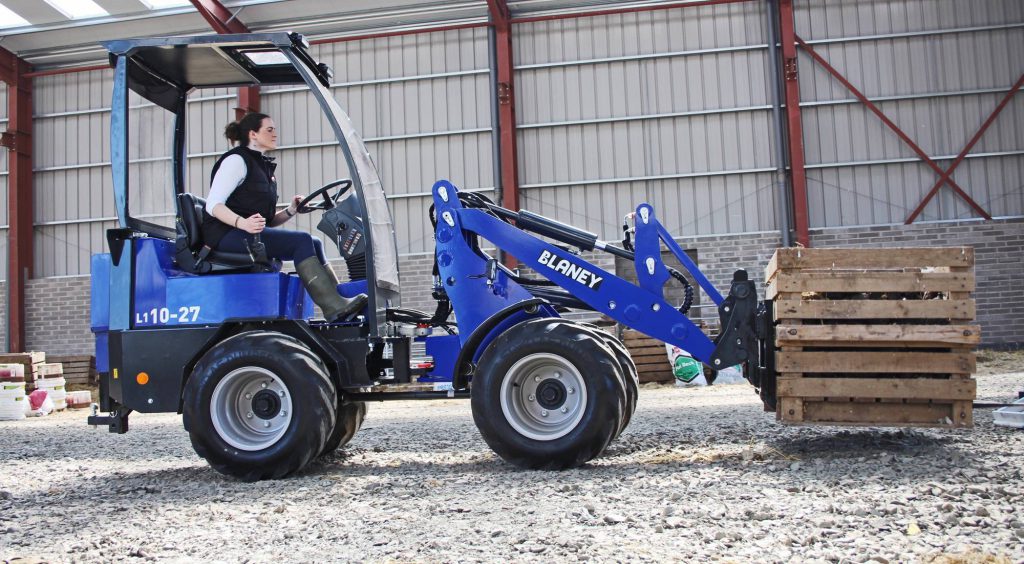 The machine is controlled via a joystick; perched on top of which is a switch for shuttling back and forth and a button for changing between low and high range.

The joystick also controls the main boom and crowd/dump functions. A second lever operates the third service and, having toggled a separate controller, the quick-attach lock/unlock junction.

To access the engine bay, the steering column swings up out of the way; then the seat and hood tilt – and are held aloft by small rams.

Asking price, for an agricultural-specification unit, is €28,800 excluding VAT.

The L1 10-27 is already in production in Blaney’s existing factory; a new facility within which these machines will be built in future is nearing completion. 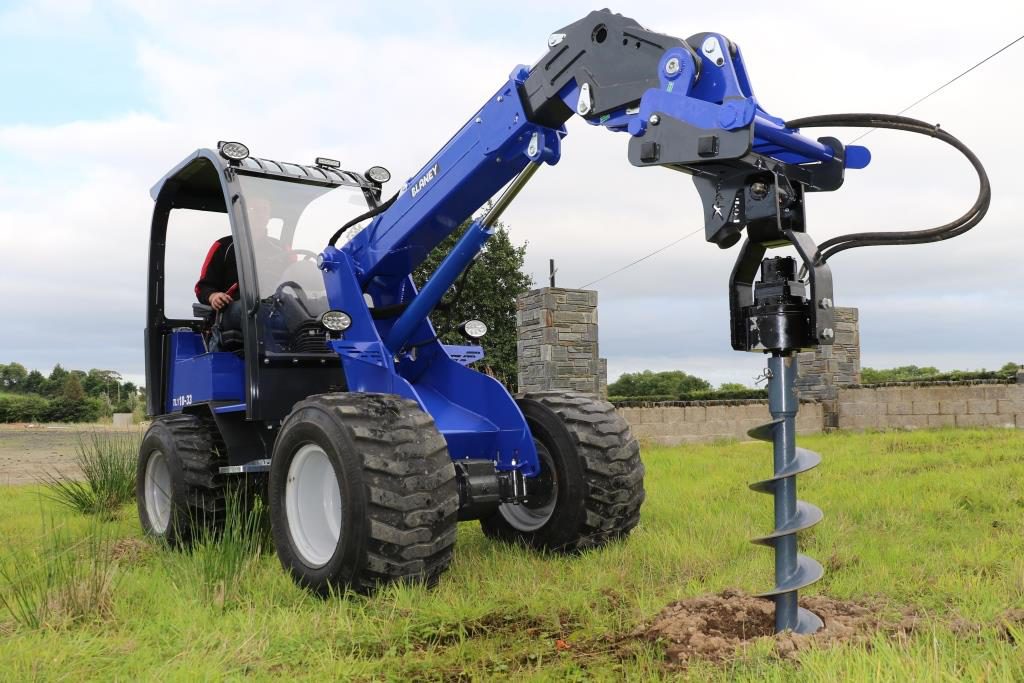 A telescopic version – the TL1 10-33 – of this pivot-steer machine boasting additional reach (extending from 2.7m to 3.3m) will shortly go into producction. It is expected to list at €31,800 excluding VAT. This machine is otherwise similar to the non-telescopic L1 10-27.

Its sibling – the TH1 15-48 – is a very different machine. It is a compact, rigid-chassis, side-cab telehandler, which sports a lifting capacity of 1.5t and a reach of 4.8m.

This machine is also due to enter production shortly. The price has not yet been finalised.

The necessary muscle is provided by a 50hp engine, which is coupled to a hydrostatic transmission. Lockable differentials, acting across all four wheels, can be specified. 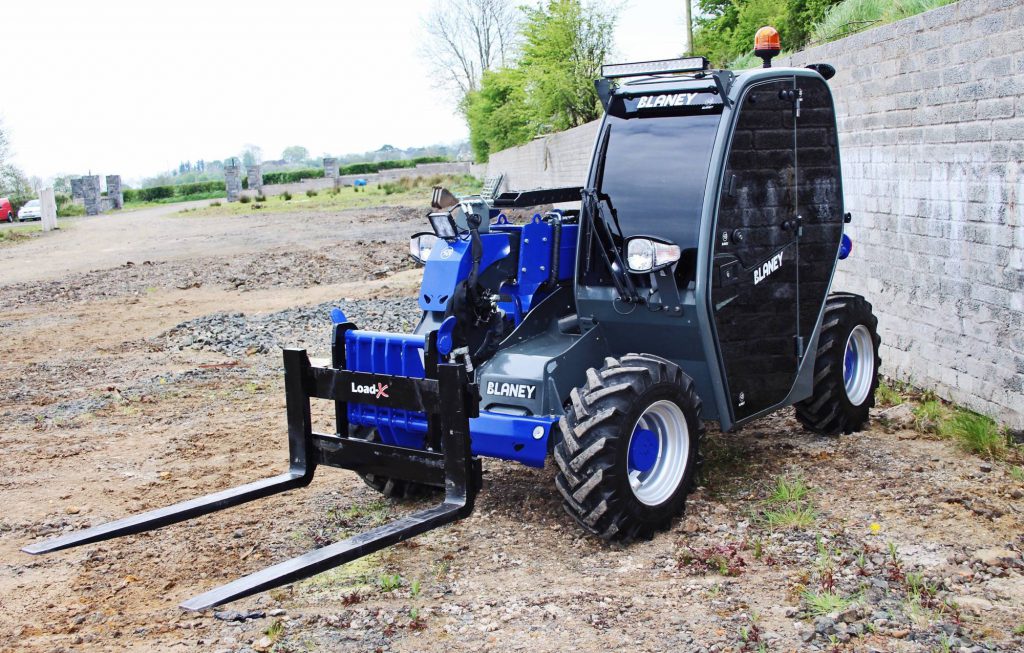 Blaney is working on a growing range of attachments for these machines – not just buckets and pallet forks but items such as mowers and side-discharge cement mixers.

While these machines are unique, in so far as they are Irish-designed and built, there is plenty of competition in this sector. Other companies, albeit overseas, manufacture similar machines which are also aimed at livestock farmers as well as a brace of other potential users. 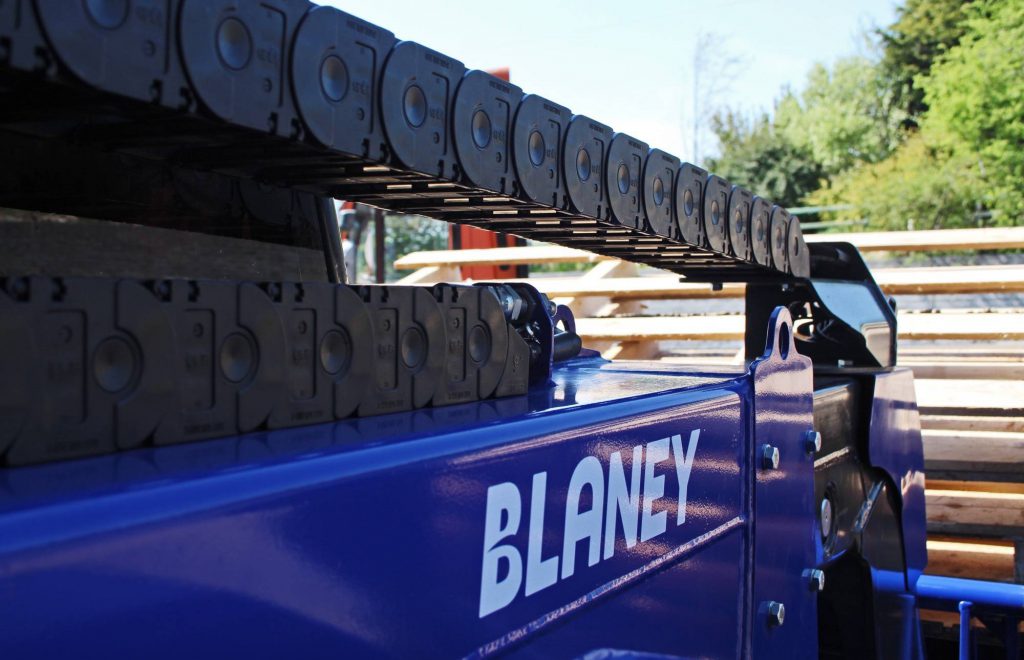 Competitors that are already active in Ireland include the likes of Weidemann, from Germany, and Giant (Tobroco), from Holland. And that’s just to name a couple.

Don’t forget either the long-established skid-steer loader, which also competes for sales in this end of the market. Numerous manufacturers build beefy versions that can comfortably handle a round bale of silage.

Of course, it’s ultimately a matter of personal preference whether you’d opt for a skid-steer machine over a miniature pivot-steer loader – all else being equal. Or, for more money, you might consider a compact, side-cab telehandler, such as the forthcoming TH1 15-48. There are plenty of options to mull over.

From the farm to the factory...making 3,000 loaders each year