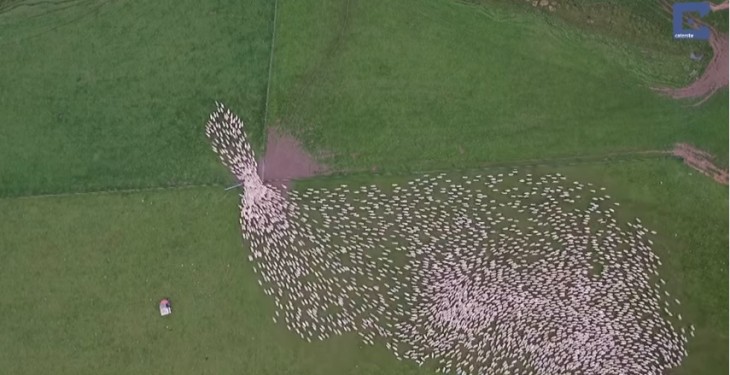 This great drone video of hundreds of sheep been herded across a field in New Zealand shows the scale of sheep farms in the country.

The footage was filmed by aerial photographer and qualified pilot Tim Whittaker, from New Zealand recently.

He films the sheep from varying heights and angles as they make their way across one field and into another.

It shows the sheep being moved through a gate, being brought from one field to another and being rounded up by sheep dogs and the farmer.

Looking at the video, the dogs are well trained at moving the sheep – ensuring that none of them make off away from the rest of the flock.

The sheep are being moved through the gate fairly rapid and it makes for a great spectacle from the air.

Speaking to The Daily Telegraph Whittaker said that he loves looking down and seeing what’s happening from above.

“It was beautiful countryside and amazing lighting. The mob sizes were huge, showing some great patterns and shapes,” he said.

The sheep go through a gate, which looks more like a bottleneck from above, creating some interesting patterns due to the changes in direction of some of the sheep.

Once they start exiting through the gate onto the new grass they diverge across the field.