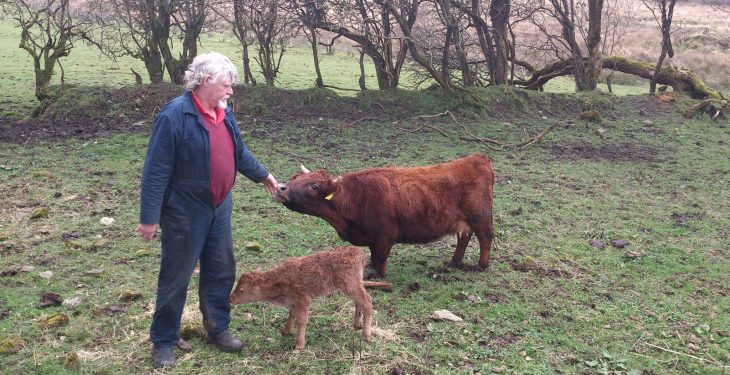 Ella with one of her previous calves Source: Ear to the Ground

A farmer in Co. Sligo claims to be the proud owner of the world’s smallest cow, which has just given birth to its fourth calf.

Ella, who will turn six-years-old on April 1, gave birth to a healthy heifer calf on Tuesday, March 21.

The tiny calf, named Martha, weighed in at just 21kg, the weight and size of an average Springer Spaniel dog.

Ella was awarded the title of the world’s smallest cow in 2014 by the Guinness Book of Records.

Judge still claims that Ella holds the title, despite the fact that the Guinness Book of Records now lists a cow in India as the world’s smallest cow.

“The cow in India is a dwarf cow that can never have a calf. Ella is a perfectly normal cow who just has a small gene.

“The definition of a cow is a female bovine who has given birth to one or more calves. So I still believe Ella holds the title as the dwarf cow in India cannot meet this requirement,” he said.

Judge never intended to put Ella in-calf, but to his surprise, she has been never had any trouble calving.

When she was born she was no bigger than a terrier. We had to nurse her a little; I was worried she wouldn’t be able to suckle her mother.

“But she has been a very lucky cow and she has travelled all over Ireland to shows,” Judge said.

Running a herd of close to 30 Dexter cattle, Judge also farms a flock of sheep in the Ox Mountains area of Co. Sligo.

Dexter cattle are traditionally quite small, but breeding a Dexter calf with the small gene is very rare.

“The small gene means that the cow will have really short legs. But you can’t breed for it.

“If you breed a Dexter cow and a Dexter bull who both have the small gene the calf will be deformed; the cow will also have difficulty calving.

Dexter cows have a habit of disappearing for a couple of days when they are ready to calve; they will normally return with a healthy calf.

“The best thing you can do is leave them alone. They’re a very healthy breed. The vet only sees our herd once a year – for the annual herd test,” Judge said. 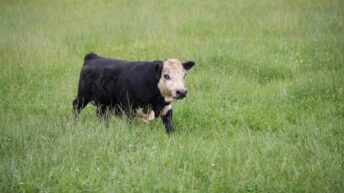