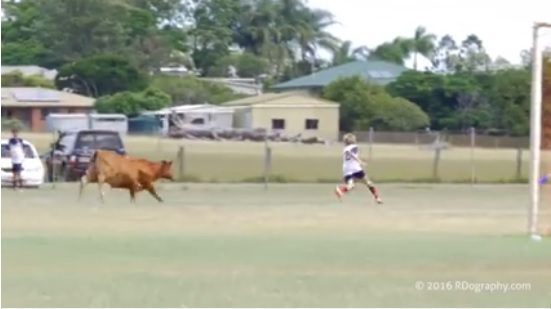 A bull recently made its way onto a pitch in Australia where a soccer match was underway and started charging at some of the players.

Ryan Devenish was at the game in Maryborough, Queensland and caught the charging bovine on camera.

He posted a caption with the video saying “things got a little interesting out at soccer/football today”.

One comment under the video, filmed at Federation Park, says “not sure the poor kid will ever wear red boots again”.

The video has over 850 shares on Facebook and shows the bull make its way out of what looks to be a wood at the side of the field. It then looks around and stares at one of the red corner flags.

It then charges after one of the players, who is wearing red boots, and towards a crowd of people.

The bull then decides he’s had enough of the match, turns around and goes back into the wood.

It is understood that it broke out of the field it was in and was looking for an entrance back into it, thus making its way to the soccer pitch.