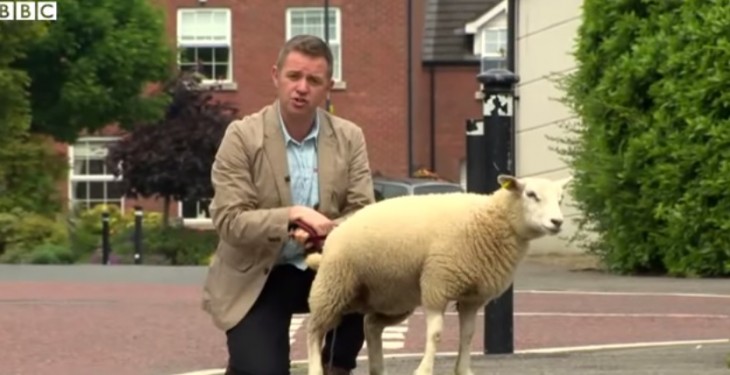 A BBC Northern Ireland reporter recently had a ‘wee moment’ with a lamb when it heeded the call of nature.

Agriculture and Environment reporter Conor Macauley was recording a clip for a story about Button, a three-month abandoned lamb in Co. Down, when she decided to urinate on him.

Button was abandoned by her mother and was being hand-reared and bottle-fed by her owner Lyndon Hull and his wife.

Macauley says that her owner had been moving the lamb from the farm to a hosing development at night to care for her and that he fell foul of a Department of Agriculture investigation.

Someone living in the housing development then reported the Hulls to the Department saying that there was a fully grown sheep in the house and that they’d seen it on a lead.

It was all sorted out after its owner tagged the lamb and said it was there for its own protection, however that did not stop Button peeing on the reporter.

Macauley realises that something is amiss when the camera crew start laughing and starts laughing himself.

Aside from feeling a bit sheepish what else could he do but stand up and shake it off his trousers?

In the case of Button, she won’t be appearing on anyone’s dinner plate in the near future, the BBC says that she will not be going to the abattoir but will be kept on as a pet.