US milk production up 1% in November

Milk production in the 23 major states in US was up by 1.1% in November, compared to the same month in 2016, according to the latest figures from US Department of Agriculture (USDA).

This increase in the 23 major states brought the total milk production to 16.2 billion pounds.

Production figures for October were also revised to 16.7 billion pounds, meaning production was up 1.3% year-on-year in the tenth month of the year. This revision represented a decrease of 27 million pounds or 0.2% from last month’s preliminary production estimate, according to the USDA.

Remaining unchanged from the previous month, the number of dairy cows on farms in the 23 major states equalled 8.73 million head; this was 57,000 head more than November 2016, figures show. 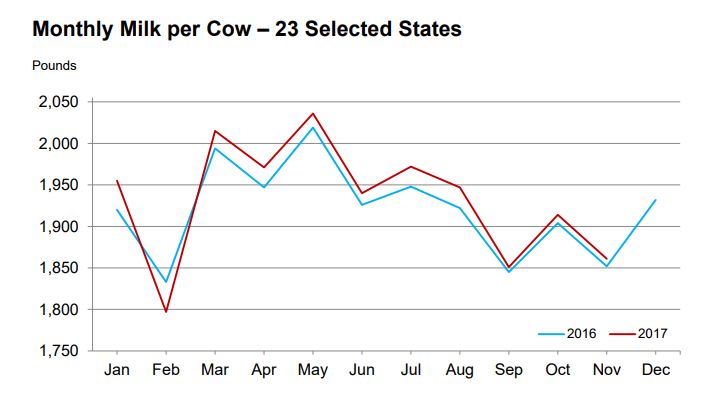 Across the US as a whole, the level of milk production was up by 1% in November, compared to the same month last year.

Milk production on dairy farms in the US during November totalled 17.3 billion pounds, up 1% from November 2016. Statistics show that production per cow in the US averaged 1,839lb for November, 9lb above the corresponding month in 2016.

There was a total of 9.4 million dairy cows in the US last month; this was unchanged from October of this year, but it was 53,000 head more than November 2016

This week’s auction, event 202, recorded a decrease of 3.9% – the biggest drop in price this year.