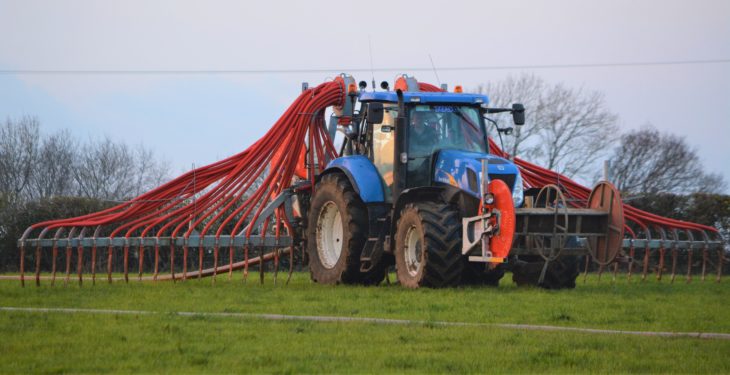 As slurry tanks reach capacity, agricultural contractors are gearing up for a busy period of spreading slurry. This comes as the first of the closed periods for spreading comes to an end this week.

Yesterday (January 11), AgriLand published the cost of getting slurry spread via tankers equipped with either splash-plates, dribble bars or trailing shoe implements.

Also Read: How much are contractors charging for slurry spreading?

In addition, AgriLand caught up with some agricultural contractors to see the range of prices currently being quoted to get slurry spread via the umbilical (pipe) system. Quotes were given on a per hour basis.

All of the contractors interviewed operated a pipe system equipped with either splash-plates or dribble bars.

Starting in Co. Galway, a contractor quoted €150/hour (including VAT) for an umbilical hose and a 12m dribble bar. The contractor operates two outfits, which can pump slurry up to 1.4km. It is also possible to join the two systems together and pump slurry to a maximum distance of 2.8km.

In Co. Monaghan, a contractor quoted a price of €120/hour (excluding VAT) for a pipe system and trailing shoe implement. The contractor starts to charge once the pump is turned on and stops charging when all the pipes are reeled in. There is no charge for setting up.

Moving to Co.Kerry, an agri-contractor quoted a price of €70/hour (excluding VAT) for setting up the system and €120/hour once pumping commences. This contractor uses a splash-plate.

Furthermore, a contractor in Co. Donegal charges a flat rate (from set-up to finish) of €100/hour for an umbilical hose and splash-plate. The hose can stretch up to 1km.

A Kilkenny-based contractor quoted a price of €120/hour for an umbilical hose and a 7.5m dribble bar. The contractor can also use a splash-plate if required. Slurry can be pumped to a maximum distance of 3km.

The contractor begins charging when the pump is turned on and stops when all the pipes are reeled in.

A contractor – located in Co. Meath – charges €120/hour (including VAT) to spread slurry via a pipe system. He can use either a 7.5m dribble bar or a splash-plate. The contractor operates two outfits which – when joined together – can pump slurry to a maximum distance of 3km.

In addition, when the outfits are run individually, the maximum distance each unit can pump slurry is 1.6km and 1.4km respectively. Charging begins when the contractor arrives on the farm and stops when the job is completed and the pipes are reeled in.

Finally, a contractor in Co.Carlow quoted a price of €120/hour (including VAT) to spread via a dribble bar. The contractor does not charge for setting up the system. 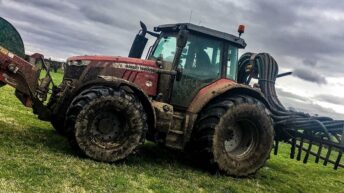