Tariffs imposed under the rules of the World Trade Organisation (WTO) would protect British farmers from European competition, according to the UK Minister for Farming.

Describing tariffs as a potential “benefit” post-Brexit, George Eustice singled out the Irish beef sector as a source of rivalry in a speech at the AHDB Meat Export Conference 2017 last week, the Farmers Guardian reports. AHDB Beef and Lamb represents beef and lamb levy payers in England and is one branch of the AHDB (Agriculture and Horticulture Development Board).

Although securing a free trade deal with the EU remained a priority, Eustice said the British agricultural sector would begin thinking about its domestic policy if trade barriers looked likely.

He also admitted the sheep sector would suffer under trade restrictions and would require the redoubling of efforts in existing markets like the Middle East, as well as expanding into new markets for lamb products.

And, addressing concerns that beef standards would drop as a result of competition from hormone-treated US beef, the minister said the UK had a different cultural relationship with food than the US.

Minister Eustice was quoted as saying: “The vast majority of agricultural sectors in the UK actually benefit from a WTO scenario; that sounds surprising because obviously everybody has got used to thinking about free trade.

“Our priority is to get that Free Trade Agreement but if during the course of development of agriculture policy it became apparent that we might be coming out on WTO scenarios, obviously at that point we would start putting in some thinking as to what the domestic policy response to that situation would have to be.”

However, AHDB Head of Strategic Insight, David Swales, warned the UK would not have free reign to tailor its own trading policy and standards if it did face WTO trade tariffs.

Launching the organisation’s ‘Horizon’ report at the conference, he said: “The WTO exists primarily to liberalise world trade, and provides a framework of rules to achieve this. These rules are far-reaching and have implications not only for UK trade but also for UK policy and policy of the devolved nations.

“In terms of policy support, the type of policy the UK can adopt post-Brexit is also constrained by WTO rules, with trade-distorting subsidies being limited and reduced over time.

“Whilst the overall level of support is more likely to be impacted by the UK government’s spending priorities, the structure of agricultural policy will have to adhere to WTO rules.” 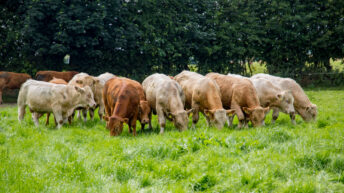 WTO tariffs would have a ‘crippling effect’ on beef