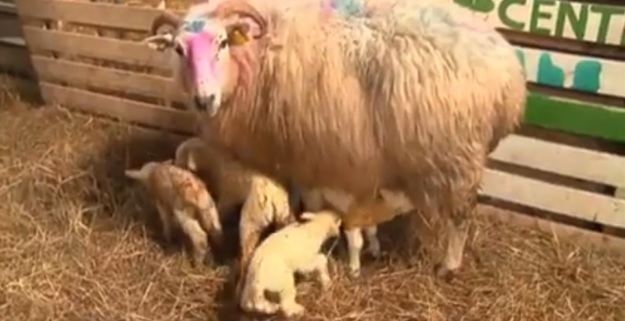 One of Seamus Mac Gearailt's sheep and her quadruplets

A Kerry farmer who is in the middle of lambing has an extra few lambs on his farm after two of his sheep had a set of quadruplets each recently.

The sheep had each set of quadruplets within hours of one another on the same day and RTE visited the farm and the two sets of quadruplets.

Seamus Cosai Mac Gearailt said it was “a great surprise” to have not only one but two sets of quadruplets. He said all eight lambs are “fine and healthy”.

The Kerry farmer told RTE that one of the lambs was very weak at first but that he has come on a lot now in the past 24 hours.

Experts say that the chances of quadruplets are as low as one in 400 but two sets on the same farm on the same day is an extremely rare event, Sean Mac an tSithigh of RTE news says.

The Dingle farmer said that it is unusual for the four lambs to survive as four lambs together puts a lot of pressure on the sheep. He plans to foster two of the lambs to other sheep that have had single births, as sheep only have two teats and she can only feed two.

Mac Gearailt said he is looking forward to the mart in September where “hopefully they’ll make a few euros”.