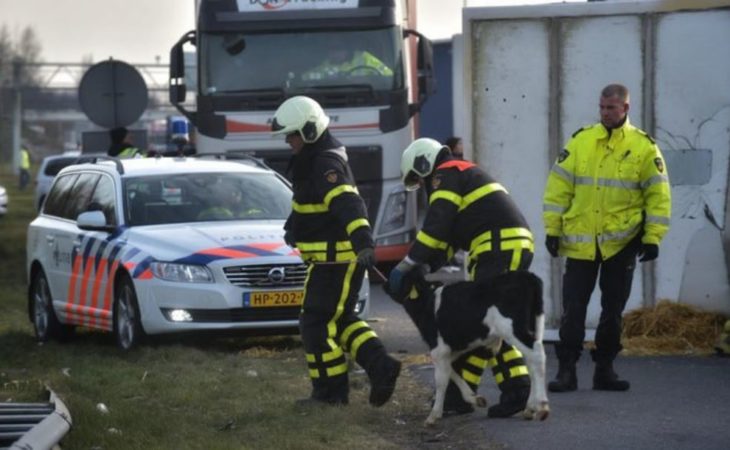 A truckload of Irish calves met with misfortune on a busy motorway in the Netherlands this evening, after being involved in an accident.

It is understood that between 100 and 108 calves were killed when the haulage lorry carrying them turned over, after colliding with another vehicle.

The incident occured around 4:00pm on a stretch of road close to Hazeldonk, near the Dutch-Belgian border.

Fortunately, the driver of the truck was not injured in the accident.

The calves, originally collected in Co. Kilkenny, were being transported by Trevor Logan Transport, a major international haulage company based in Co. Antrim.

The calves – 300 in total – were on route to Bultsterweg, Groningen, to be reared for veal. It is understood that the calves left from Rosslare port last Tuesday (February 27).

Barry Logan, of the company, confirmed that around 108 calves had sadly been killed in the accident. The remaining calves survived the ordeal.

We don’t know what happened yet. The lorry crashed and fell over on its side. I have spoken to the driver and he is okay.

“They are our own calves; we bought them in the south. We transport over there every year. The calves were going to be reared for veal. Nothing like this has ever happened to us before,” he said.

Hogan said that the company has a representative on the ground who is dealing with the respective authorities.

BN DeStem, a regional Dutch newspaper, reported that the A16 motorway remained closed for a number of hours after the incident.

The video footage (below) was shot by Tom van der Put.

The newspaper reported that the situation “was caused by a rear-end collision between two trucks”. The other truck did not tip over but had a lot of material damage, according to BN DeStem.

It stated: “Emergency services, including a veterinarian and a forester, spent several hours catching escaped calves. Replacement transport came on-site to recharge [re-load] the calves and transport them further. The dead animals were cleared.” 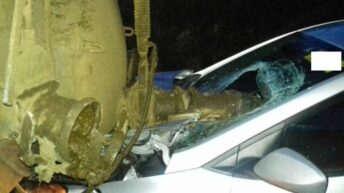