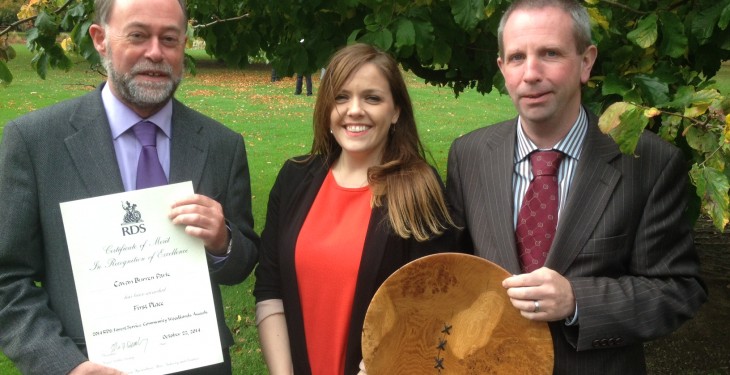 Ireland’s prehistoric park – Cavan Burren – covers an area of 124ha of forest, featuring historical monuments, megalithic tombs (some older then the pyramids), hut sites, prehistoric rock art and echoes of a 350 million year old dead sea. Accessible by 4.5km of newly created walking trails, Cavan Burren Park is part of, and a gateway to, the wider UNESCO designated ‘Marble Arch Caves Global Geopark’, a cross border area within Cavan and Fermanagh, internationally recognised as having exceptional geological heritage including the finest underground caves in Ireland or the UK.

Collecting the award on behalf of Coillte was Bill Murphy, Head of Recreation, Environment and Public Goods, who said, that Cavan Burren Park is an inspiring example of a project that has brought together partners, north and south, to establish a sustainable recreation and tourism resource that seeks to protect archaeological features and landscapes, while at the same creating tourism infrastructure that will be of huge benefit to the local economy. “Areas like Cavan Burren Park are essential in supporting rural communities, in creating interesting destinations for people to visit and enjoy.”

The Cavan Burren Park will attract visitors to the North West Cavan bringing with them significant spend in local restaurants, shops, and in accommodation. Coillte estimates that the economic activity generated by visits to its forests is in the region of €14.80 per visit with an aggregate value of €270 million per annum.