A tractor was involved in a serious three-vehicle accident in Co. Roscommon yesterday, Monday, July 13, which resulted in a man being airlifted to hospital.

In a short statement, Gardaí said they were appealing for witnesses following the collision, which occurred around 6:15pm yesterday on the N5 road at Portaghard, near the village of Frenchpark.

A man in his early 60s was taken by air ambulance to University Hospital Galway with serious injuries after the lorry he was driving collided with the tractor and a car. The drivers of the car and the tractor were uninjured.

Gardaí are appealing for any witnesses to this collision to come forward. Specifically, any road users who may have camera footage, including dash-cam footage, and who were traveling in the area at the time, are asked to make this footage available to Gardaí.

Collision between car and mower

In unrelated news, a man was taken to hospital following a serious collision between a car and a tractor and mower in the midlands in recent days.

The incident occurred in Co. Offaly on Friday, July 10, the Gardaí confirmed.

In a statement to AgriLand, a spokesperson for An Garda Síochána noted: “Gardaí attended a two-vehicle road traffic collision between a car and a tractor that occurred at Annaharvey, Tullamore, Co. Offaly, at approximately 3:30pm on Friday, July 10. 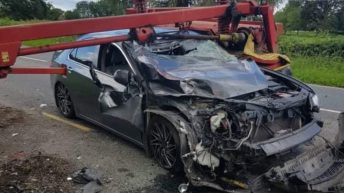