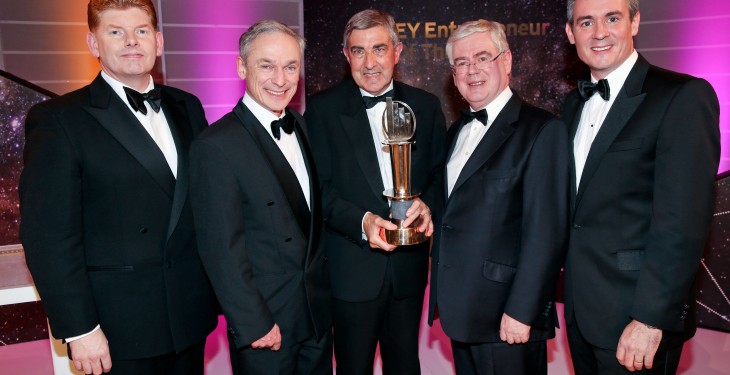 “There are huge opportunities out there. The Irish are better than any other nationality I have worked with, dealt with, hired, brought into our company when we really wanted excellence and success and when we wanted the message spread. It was the Irish people we recruited here in Ireland and we sent overseas.”

These were the sentiments of Kerry Group founder Denis Brosnan, who received this year’s EY  Special Award for his outstanding contributions to the development and progression of Ireland’s commercial, educational and artistic life at a gala awards ceremony held in Dublin last night.

Each year, the Special Award is presented to an individual who has “made a profound contribution to the island of Ireland”.

“The business founded by tonight’s recipient can boast manufacturing operations in 25 countries – with international sales offices in a further 20 countries,” said Frank O’Keeffe, partner-in-charge of EY Entrepreneur of the Year. “It employs 24,000 people. It sells in excess of 15,000 products in over 140 countries and, last year, its global sales approached €6bn. But what’s most impressive – in the face of these stunning numbers – is that this entrepreneur has always known that community counts above all.”

In accepting his award, Brosnan paid tribute to his hard-working and talented staff, which he stressed, was a key ingredient to success.

“Perhaps it was the wild geese sent out a few centuries ago, became the Kerry wild geese of my time. And remember in fact for all of you, do what we did. We hired the best graduates coming out of all the Irish universities and third-level colleges.

“We taught them. We trained them. We put endless numbers of hours into making them perform the job better than anyone else. I always took the view that I trained the person under me to be better than I was and we let that percolate the whole organisation.

“And I hope my message will drive all the entrepreneurs to further greatness.”

“For many years before Denis came along the Irish food industry really was about farming. Producing basic product trading that basic product,” the minister said.

“Kerry Group changed all that. Nothing is too big for us. Yes we come from north Kerry we’ve built a business out of a indigenous community and were going to take over the world, was its message. Here’s a person who constantly thinks about what he can do tomorrow to add to what he’s done today. And that is why people talk about Denis Brosnan and say can this be me.”

The 2013 Ernst and Young Entrepreneur of the Year Awards came to a climax last night. This year’s recipient of the award was Patrick Joy who founded Louth-based manufacture Suretank, the company is the world’s largest manufacturer of cargo-carrying units for the offshore oil and gas industry.

Out of the 24 finalists at last night’s event five came from the agricultural industry. These included Caroline Keeling of Keelings; Liam Woulfe of Freshgrass Group; Martin Hamilton of Mash Direct; Samuel Shine of Samco; and John Walshe, of Callan Bacon.

Winner of the Special Award Denis Brosnan, founder of Kerry Group, with Tánaiste; Minister for Foreign Affairs and Trade, Eamon Gilmore; and Minister for Jobs, Enterprise and Innovation, Richard Bruton