Does butter taste better when the cows are happy? 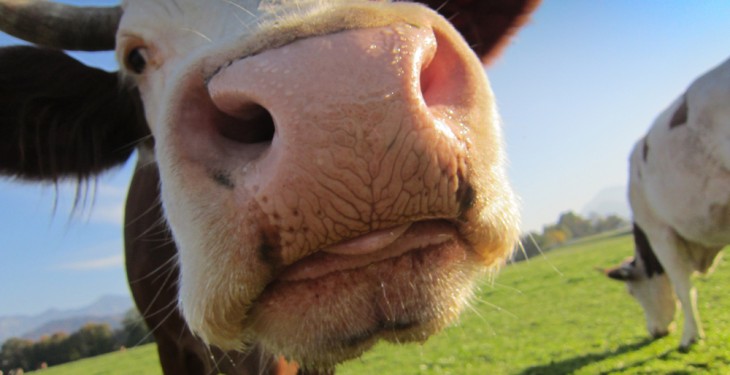 What will dairy cows of the future look like? How much is too much for a litre of milk? Does butter taste better when the cows are happy? What does a glass of milk have to do with environmental protection? Will cows be pastured in future, too?

These are some of the questions that the new Centre of Integrated Dairy Research (CIDRe) is looking to answer. Scientists from a wide range of disciplines are working in this recently established centre at the University of Bonn in Germany.

For more than 10,000 years, humans have been using cows for obtaining milk and meat, as providers of fertiliser and as draft animals. During cold periods, humans used the animals’ skins or their leather for protection. In short, cattle helped humans survive under adverse conditions. The production conditions have, however, changed drastically over time.

Originally, cows gave about eight litres of milk a day to feed a calf. Modern high-performance cows produce 50 litres a day now, sometimes at a dramatic price. “The dairy industry system has been off balance for quite some time,” noted Prof Dr Wolfgang Büscher of Bonn University.

Due to the extreme increase in milk production, cows often need significantly more energy during the first 100 days after calving than they can take in with their feed, according to Prof Büscher.

Dr Plattes explained further: “The animals’ wellness is becoming the focus for ethical and economic reasons. If more species-appropriate animal husbandry results in better products, the economic advantages will also be obvious.”

The environmental effects of modern milk production are also tangible. Gases that further stoke global climate change can escape from dairy cows’ stomachs. Consequently, the central question the researchers involved with the CIDRe, who come from Agricultural Science, IT, Physics, Veterinary Medicine, Economics and Social Sciences, are seeking to answer is how the complex dairy industry system can be brought into balance.

In addition to mere milk production, both the health and wellness of the animals, as well as the protection of the environment should be taken into account. Related to this are socio-economic questions; such as, how highly – in terms of price – consumers value a sustainable dairy industry.

First, however, lots of data must be collected in order to be able to optimize the dairy industry system also with regard to animal wellness and environmental protection.

Here, the Frankenforst research station of the University of Bonn plays a central role in this research area.

“It is the only one of its type in Germany and allows research at the highest level,” said Prof Büscher. So for example, a host of sensors captures how much feed a cow eats and how much she moves. Water intake, milk flow and ingredients as well as heart frequency are among the parameters that are recorded digitally, based on which the scientists can determine how each individual cow is doing. The animals’ behaviour is analysed in co-operation with the University of Halle-Wittenberg.

The scientists want to capture the dairy industry system as completely as possible and then develop models from their results. “This will allow us to answer several critical questions,” said Dr Plattes. “Such as solutions for the trade-off between more freedom to move and the related increase in ammonia and odour emissions.”