The sheep trade remained relatively steady in recent days, according to Bord Bia with some tightening in supplies reported.

Latest quotes from factories are in the region of €5.40/kg for this week. However, according to the IFA there is strong factory demand for lambs.

Supplies are tight, according to the IFA’s latest update and factories paying up to 20c above quotes.

According to Bord Bia it is hoped that the upcoming Ramadan festival which begins on June 18 will help the trade.

However, it says last week a mixed trade was reported across our key export markets.

Last week base quotes for spring lamb were generally making around €5.20/kg with selected lots achieving higher prices while prices paid for culled ewes were making around €2.90/kg.

Supplies at sheep export meat plants for the week ending May 30 stood at around 45,600 head which was up 5% on the corresponding week in 2014. 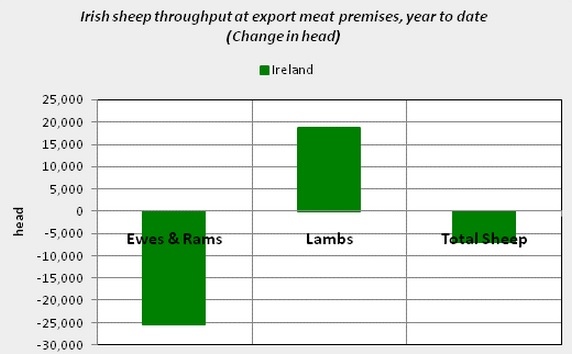 Cumulative supplies for the year to date are currently down slightly on year previous levels standing at around 905,000 head.

In Britain, Bord Bia says a relatively stable trade was reported with supplies tightening. The SQQ live price for lambs in England and Wales was making the equivalent of around €5.72/kg dw during the week.

In France, it says some increase in competition was reported due to a rise in volume of French Lacaune lamb on the market. Promotions were centred mainly on legs, shoulders and chops.

The price for Grade 1 Irish lamb was making €5.72kg (DW incl VAT) in during the week.