The number of cattle coming forward for slaughter was down again last week when compared to the same week last year.

This is the sixth consecutive week that cattle supplies have been lower than their corresponding week in 2014. This has resulted in the cumulative beef kill falling over 5% in the six week period.

Last week 29,214 cattle were killed at export meat plants compared to 31,734 in the same week last year. This represents a fall of 7%. 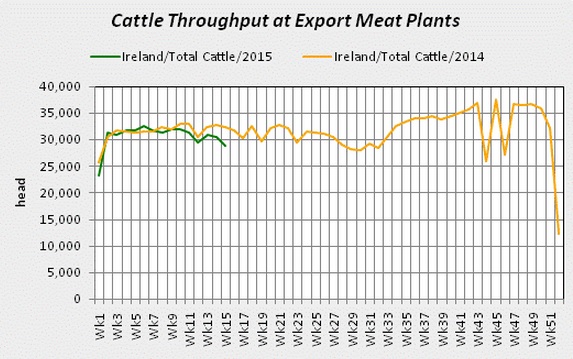 According to Bord Bia an increase of almost 50,000 head in live cattle exports in 2013 combined with a drop of more than 100,000 head in calf registrations point to a significant tightening in finished cattle supplies this year.

According to Bord Bia figures from the Department of Agriculture’s AIM database for September 2014 show little change in the number of male cattle aged 18 – 24 months while numbers from 12 – 18 months were 56,000 head lower.

Female numbers in the 18 – 24 age bracket were 35,000 head higher. However, this growth reflects higher dairy breeding numbers as farmers prepare for the removal of dairy quotas. Numbers of heifers aged 12 – 18 months was 35,000 head lower.

Taking these figures into account, Bord Bia says supplies at export plants are expected to fall by 120,000 – 150,000 head this year.

Some further lift in carcase weights is likely following the recovery evident in 2014.

Bord Bia says these developments would leave export availability standing at around 480,000 tonnes, a drop of more than 8%.