The Irish Cattle and Sheep Farmers’ Association (ICSA) has expressed concerns over the possibility of Ireland losing the EU trade portfolio at an “extremely delicate stage of Brexit”.

The ICSA president Edmond Phelan has said that it is “absolutely essential” that Ireland keeps the trade portfolio in the European Commission because a “bad Brexit outcome will devastate Ireland for generations”.

Hogan, as the former EU Commissioner for Agriculture and Rural Development, is especially well-known to Irish farmers.

‘Ireland must protect its national interests’

While saying that the anger and outrage around the Oireachtas Golf Society dinner is “very justified”, Phelan feels it is “critical we don’t lose sight of the fact that Brexit is at an extremely delicate stage”.

“It is all very well saying that any EU Trade Commissioner, regardless of country, has the same mandate – but it is naïve to think that Brexit weighs equally on all EU member states.

While it remains the case that Phil Hogan currently holds the position, Ireland needs to be very careful not to lose it, one way or the other.

While the decision by Hogan to attend the golf dinner was a “bad error”, Phelan feels there is “no value in compounding it with a strategically disastrous error in terms of Brexit”.

“The trade portfolio is simply too important to lose,” Phelan continued.

“The reality is that if we do not get a trade deal with the UK which protects our exports there, we are signing up for decades like the 1980s or – even worse – the 1930s.

“The implications of that don’t bear thinking about. Do we really want to apply a devastating blow to our export sector…one which farming might never recover from?” 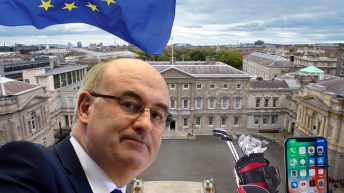