Up to 50mm of rain are expected to fall in parts of the country this week and, according to Met Eireann, the rain is very badly needed.

According to Met Eireann’s Evelyn Cusack it has been exceptionally dry over many parts of the country since June 1, the first day of the meteorological summer.

Cusack said the soil moisture deficit is currently greater than 50mm in the East and she said that means over two inches of rain is needed in these areas. 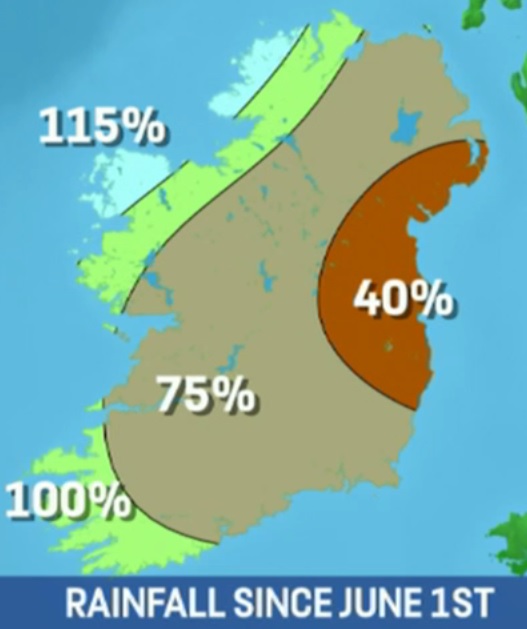 Heavy rainfall in recent days has slowed back grass growth rates in the north, averaging 65kg this week, according to Grassland Specialist Cathal McAleer.

However, he also says in the southern half of the country, growth rates have been considerably lower at around 45kg with moisture deficiency being the main cause of this lower growth.

“It is vital that we exploit any rainfall by applying fert beforehand, up to 30 units N will be required per acre,” he said.

McAleer said most platforms will have a proportion of stem remaining in some swards and advised farmers that it is important to remove this stem once surpluses arise.

“Substantial milk drops can occur if sward quality deteriorates and cows have to work hard, while production costs remain the same. Paddocks can be cut for bales at covers as low as 1200kg, approx 2.5 bales per acre.

“A cheap way to create high quality feed in subsequent rotations, he said.

McAleer said if this wet weather continues farmers should cut surpluses sooner rather than later to have the paddocks back in rotation adding that the bales can be set aside for feeding dry cows.

“While a 16-18 day rotation has been common for the past three-four rotations, rotation length should gradually be lengthened to around 25 days by end of July, target cover/cow of 180-200kg dependent on growth rates achieved,” he said.