Farmer has lucky escape after tractor bursts into flames 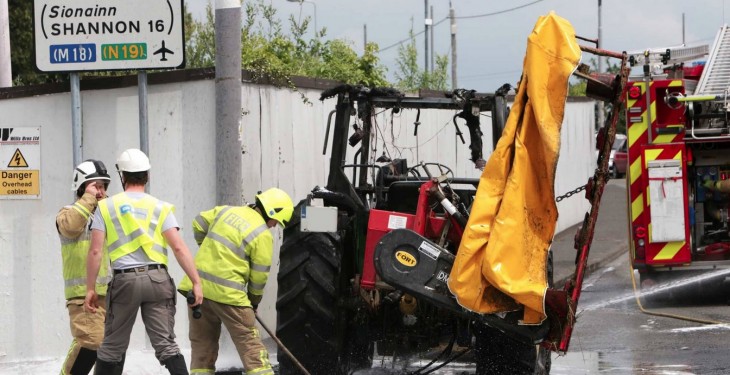 A Co. Clare farmer had a lucky escape recently after his tractor erupted into flames in Clarecastle.

The Clare Herald reports that the farmer was forced to jump from the cab of the tractor after it went on fire, but not before he managed to steer it to the kerb before he jumped to safety, it says.

Two units of the fire brigade and Gardai attended the incident which happened on the old N18 Ennis to Limerick road.

The road was cordoned off by the Gardai as fire-fighters dealt with the burning tractor and the driver was uninjured.

Speaking to the Clare Herald emergency services at the scene said the tractor was “well alight” with flames reaching 20ft into the air when they arrived.

He went on to say that ESB engineers were called to inspect poles and wires where scorching could be seen on cables.

Speaking to the Clare paper, a passerby said that they saw smoke and flames coming out of [the tractor] and that the driver pulled in to the footpath and jumped out.

“He was quick off the mark and was fair lucky I’d say.”

Another person at the scene said that they weren’t sure if he kept driving while it was on fire to avoid stopping in front of the houses and pubs.

“It could have been worse if it happened in the middle of the street. Fair play to him anyway.”