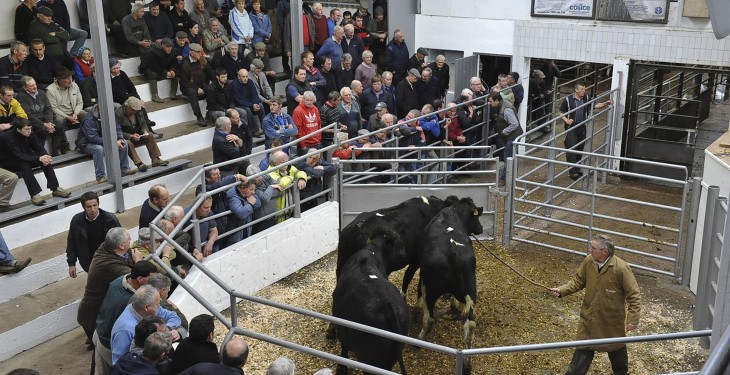 Mart managers in the West are reporting increased cattle numbers as a result of worsening ground and grass growing conditions.

This has has a negative impact on the plainer cattle trade, they say. There were 500 cattle on offer in Elphin on Monday evening and strong prices were achieved for weaning bulls and heifers.

“The trade wasn’t going to bad, but plainer lots are back a little,” said the Mart Manager.

The un-August like weather has been cited for the increased cattle numbers reported Gerry Connellan, Mart Manager.

“The poor weather in the west is bringing out cattle here at the moment, it is pure winter weather we are dealing with,” he said.

There were increased numbers of cattle on offer at Roscommon Mart on Friday.

Prices are holding well with the trade for dry cows and heifers slightly improved on the previous week reported Maura Quigley, Mart Manager.

“There was a good demand and a high clearance of lots particularly for heifers and dry cows,” she said.

She also said that there was a good trade for quality type steers, but lesser quality lots were a little easier.

There were 650 cattle on offer in Carnew on Saturday reported Mart Manager David Quinn.

He said there was a very strong trade for all classes with the trade being similar to last week.

There was also a good trade for weaning bulls with the hammer falling on lots at €450-1,020 over.

He also said there was also a small selection of cows and calves on offer and these sold from €1,200-1,450.

Kilmallock Mart had 1,470 cattle on offer on Monday. It reported a good trade for quality lots but the price for plainer lots has slipped.

“There was a good trade but plainer cattle have slipped back a bit,” said Denis Kirby.

He also said that the trade for heifers remained strong with lots selling from €2.41-2.60/kg for the store type heifers while the heavier forward type lots sold for €2.05-2.30/kg.