Would You Marry a Farmer 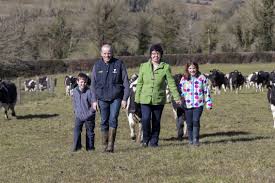 Would You Marry A Farmer ? Confessions of An Irish Farmerette’ is a non-fiction book based on Irish blogger, Lorna Sixsmith.

Lorna Sixsmith is an avid blogger and has developed a remarkable following with farmers  (male and female) all over the world connecting with her experiences. A recent post entitled ‘Advice To Those Considering Marrying  A Farmer’ became so popular that Lorna has decided to develop the post into a book. The book -Would You Marry a Farmer ? – detail the gritty realism of farming but with a humourous and tongue-in-cheek approach. It will be self published and launched in November 2013. A Fundit crowdfunding project is currently underway (closes 31st July) to raise finance for the self publishing and to publicise it.

Lorna was reared on a dairy farm, lived in the UK for 12 years and has now returned to dairy and beef farming with her ex-scientist now-farmer husband. They have two children and besides farming, Lorna write two blogs, teaches social media to small businesses, is a co-organiser of KLCK Bloggers Network and Blog Awards Ireland and will be teaching farmers how to tweet at this year’s Ploughing Championships.

Her Irish Farmerette blog incorporates ‘the good, the bad and the ugly’ of farming life in Ireland, often comparing it to other countries and to the past and always with a dash of realism and humour.  Topics include favourite recipes, advice on finding an eligible farmer to marry, the differences in feeding calves by bucket or by teat, the effects of the fodder crisis and the production of Irish food.

Rural romances or novels with a farm as the setting are becoming increasingly popular but this book with be a farming book with a difference as it will recount the various challenges of farming – all from a humourous angle.  Readers of the blog claim that their situation is just the same, hence many will be laughing at their own situations when reading the book.

The original post that started off the idea for her book can be read here and the responses viewed.  It has received over 50,000 views to date, 9,000 shares on facebook and more than 60 comments.

Supporters can back this journey by pre-ordering a copy or signing up for other exciting rewards such as an online social media course or adopting one of the 2014 heifer calves at Garrendenny!

‘ Would You Marry A Farmer ?’ Fund it and find out!