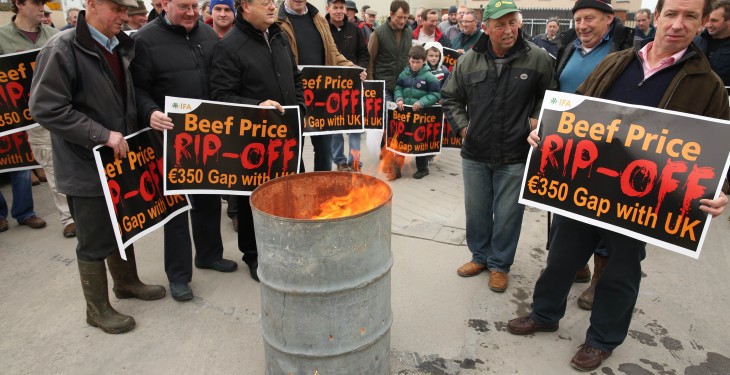 Finished cattle prices fell considerably in 2014 with the value of output per hectare down 18% on the 2013 level.

The Teagasc figures do show one positive for finishers last year in that direct costs also decreased substantially mostly due to a reduction in concentrate feed use, which was at an elevated level in 2013 due to the fodder crisis.

However, the fall in costs was not sufficient to offset declining prices and net margins declined by 30%, pushing the margin before direct payments further into negative territory.

Teagasc data showing the average purchase and sales prices recorded on cattle finishing farms for the various animal types in 2013 and 2014 also demonstrate the the squeeze in margins endured by cattle finishers in 2014.

The sale price for finished animals declined by a much larger amount than young animal purchase price. Average finished animal prices were down 9% in 2014.

The NFS data also shows the variation in performance between the top and bottom farms. Looking again at average purchase and sales prices, top performng farmers purchased young animals at prices about 7 to 8% lower than farms in the bottom group but still managed to sell the finished animals at a 2% premium over the price received by the Bottom group.

Further evidance of this variation in performance can be seen in the output figures.

The value of gross output per hectare varies considerably across the three groups, mostly due to a variation in stocking rates.

The average gross output per hectare for the Bottom group slipped into the negative in 2014. The natural advantage of the Top group is evident with 88% of them farming very good soils.

Teagasc says an enterprise is defined as cattle finishing if over 70% of the animals are sold for slaughter, approximately 10,900 farms nationally are represented in this analysis.

The data presented here are for enterprises with more than 10 livestock units (lu) in 2014.The profit figures reported here exclude all decoupled payments and the costs relating to family labour.