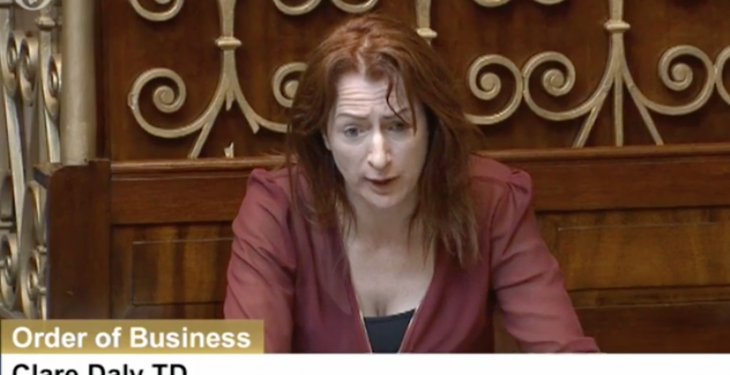 Independent TD Clare Daly has called for a ban on hare coursing, citing cruelty and what she says is contradictory laws around the protection of hares.

However the Minister for Agriculture, Michael Creed, has said he has no intentions to ban the sport.

Daly, a TD for Dublin North – the only Dublin constituency, she says, which still has hare coursing events – told the Dail recently that the Irish Council Against Blood Sports has a video of barbarity in Balbriggan.

Daly says that the rules around hare coursing are contradictory where, on the one hand, hares are protected under the Wildlife Act but, on the other, under the Animal Health and Welfare Act all animals are protected with the exception of hares to be coursed.

She said that this resulted, in 2015, in a situation where 7,000 hares were taken from the wild to be used in live coursing events. While Creed said the figures show that in 2014-15 99.3% of hares are released back into the wild, Daly said it was often to die.

“Reports from the National Parks and Wildlife Service… tell us that only 17 of the 75 events held in the country last year had National Parks and Wildlife Service officials in attendance and the state of many of the hares requiring assistance, which were released back to the wild distressed, is evident in its reports, which refute the information given to the Minister by Bord na gCon.”

Many hares, she said, which are released back into the wild, were very distressed and die afterwards.

Creed said that under legislation ensured a prohibition on the coursing of sick or pregnant hares and a requirement that hares be released back into the wild during daylight hours.

However, Daly said at a coursing event in Nenagh, some of the hares released included heavily pregnant hares.

Daly said the solution is to ban coursing outright, but Creed said he has no intentions to do so.

“We have travelled some distance in respect of the supervision of hare coursing and I do not have any plans to ban it. Equally, however, I would add that all parties involved in hare coursing must operate within the law and the terms of licences issued to them in respect of hare capture and so on,” the Minister said.