TAMS grant for GPS spreaders extended to all farmers 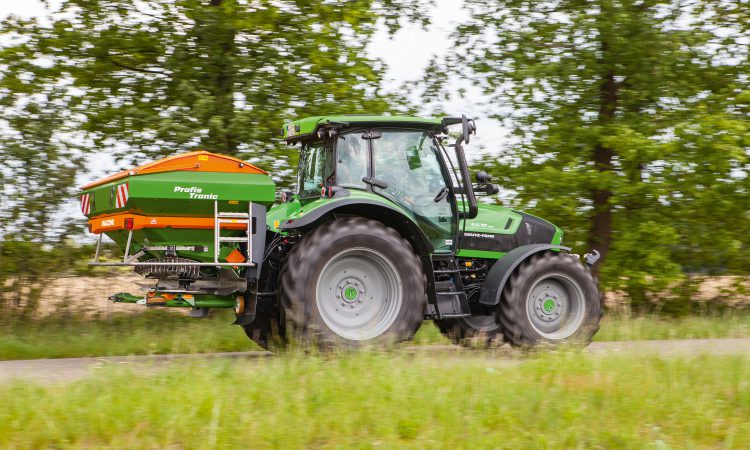 The Minster for Agriculture, Food and the Marine Charlie McConalogue has confirmed the changes to the Targeted Agricultural Modernisation Scheme (TAMS) 2021, meaning that GPS spreaders will now be available for all categories of applicants.

Dairy or livestock farmers looking to upgrade their fertiliser spreaders can now invest in a precision spreader with up to 60% financial support. But what can a GPS spreader do for you?

Brian Powell, a dairy farmer from Co. Tipperary, explains some of the features you can expect on this class of fertiliser spreader.

After choosing to buy an Amazone ZA-V Profis in 2018, Brian explained: “We are dairy farmers so we’re trying to grow as much grass as possible. Fertiliser and fertiliser accuracy is one of the most important factors for this.

Brian further explained: “With the weigh cells on this machine and the control panel inside the tractor, we’re able to measure how much fertiliser each individual paddock gets and, at the end of the year, we’re able to tell what paddocks got what fertiliser.”

The ZA-V takes a lot of the guesswork out of spreading. The speed reading from the tractor combined with the weigh cells constantly calibrating means you can put out exactly the volume of fertiliser required, saving money and time as you won’t be running out with acres left to spread.

Unique to the ZA-V, it features online calibration which means the weigh cell is constantly working to feed the live weight into the control box.

Furthermore, on the ZA-V Profis, any possible influences due to a change in the centre of gravity are taken into account by the on-the-move signal from the tilt sensor. The two-dimensional tilt sensor, which detects angles to the front and back or side to side, corrects any errors in the measuring procedure which might occur when driving up and down hills or when driving across a slope.

Mineral fertilisers require particularly gentle treatment to ensure precise distribution and transport out to the crop over the total working width. Fertiliser which has been already damaged by the spreader can no longer be spread evenly.

Amazone calls it the soft ballistic system (SBS), the star agitation system on the ZA-V spins at a slow 45rpm, which makes it very easy on fertiliser.

Unlike other systems that push the fertiliser around the shutter, the star pushes material downwards with enough force to maintain a consistent flow but slow enough not to break up the fertiliser.

The fertiliser drops from the hopper onto the centre of the disc where it meets the vane at its slowest point preventing damage to the granules. The fertiliser is then accelerated very gently along the length of the vane and out to your working width.

With their special shape, and several feed-on points at both the upper and lower end of the spreading vane, the newly developed spreading vanes of the ZA-V provide an especially good distribution.

On ZA-V spreaders, the entire spreading system is made from stainless steel and high-quality glass-fibre reinforced plastic and thus provides a long service life and a high resale value.

The hydraulically-driven ZA-V spreader makes operation possible with different spreading disc speeds, irrespective of the engine speed of the tractor. In this way a particularly comfortable and precise spreading is possible and side, border or water course spreading can be activated independently to each side.

The switching over between these individual functions is convenient and possible on the move. If the pre-set speed for spreading at the field border is not precise enough, then this can also be adjusted via the terminal on the move. With hydraulic spreading disc drive, up to 16 part-width sections can be actuated.

“The reason we chose an Amazone is because of its ease of operating controls. They’re electronically controlled from the cab, from a panel, allowing you to turn on the ‘left’ or ‘right’ and easily adjust the amount of fertiliser spread – even on the move,” stated Brian.

Thanks to the Amazone fertiliser app, setup is a doddle. Simply download the app, select what type of fertiliser you’re spreading, under what conditions, and it gives you base settings which are usually spot on. 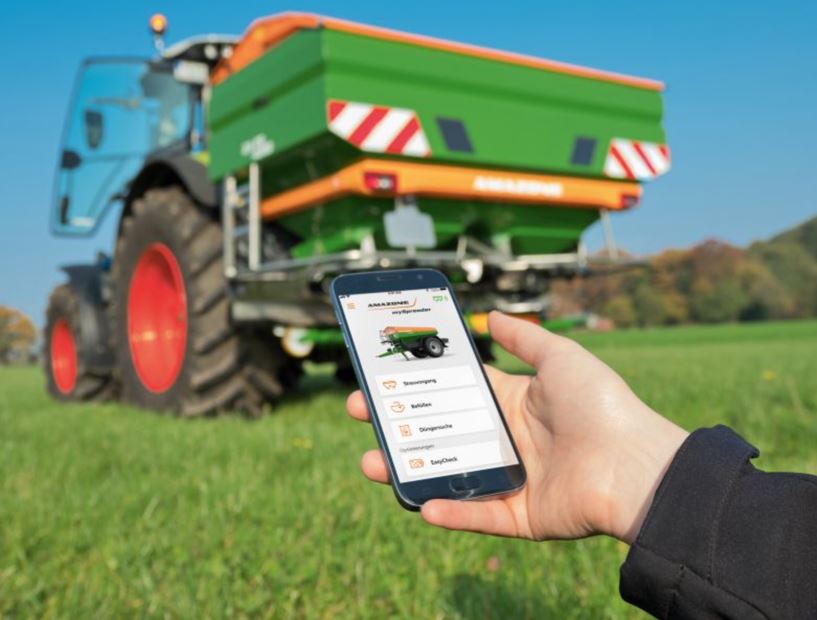 The ZA-V hopper is pressed out of one piece of sheet steel, which means there are no corners or welds for fertiliser to gather. This makes it exceptionally strong and also simple to clean. People have compared the hopper to a bowl of a toilet when a pressure washer is used, all the old fertiliser is quickly rinsed out the bottom of the hopper with nowhere to get stuck.

This is something Brian really appreciates. “It also only has one break in the hopper compared to others which have a few breaks; this makes it easier to wash out and there are less problems with rust,” he explained. 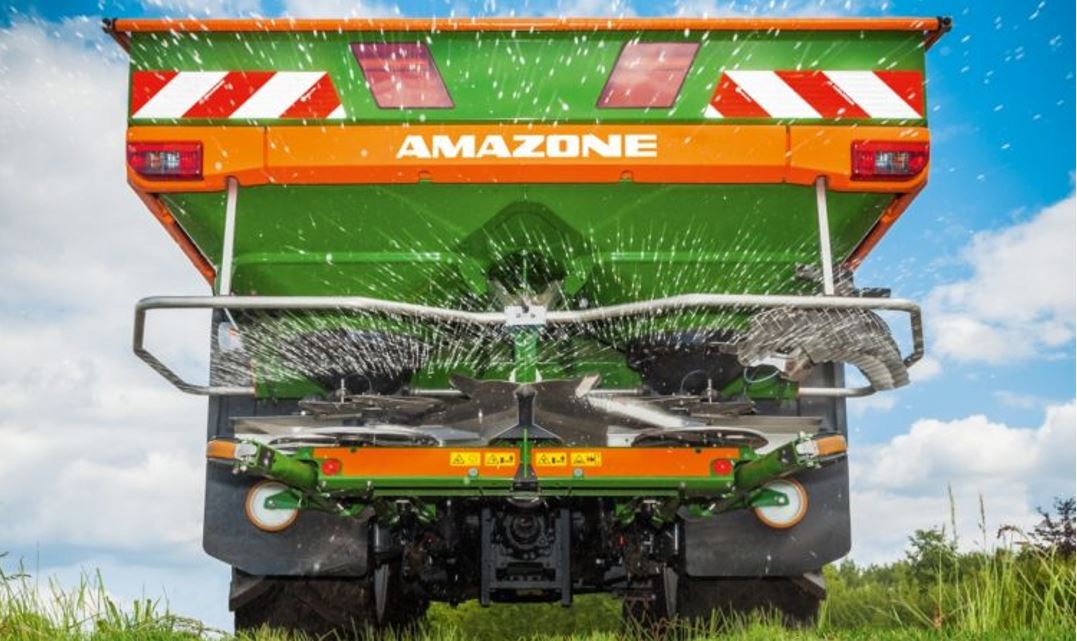 Ease of a hydraulic folding cover

Like many Amazone spreaders, the ZA-V has a high-quality roller tarpaulin cover. This rolls away and is taut so water doesn’t pool in it. Brian chose to spec the hydraulic version of this cover.

“The hydraulic cover makes it easier to open as it is so tall; it would be very hard to get up on it if it didn’t have it on it but there are ladders either side too,” he said. 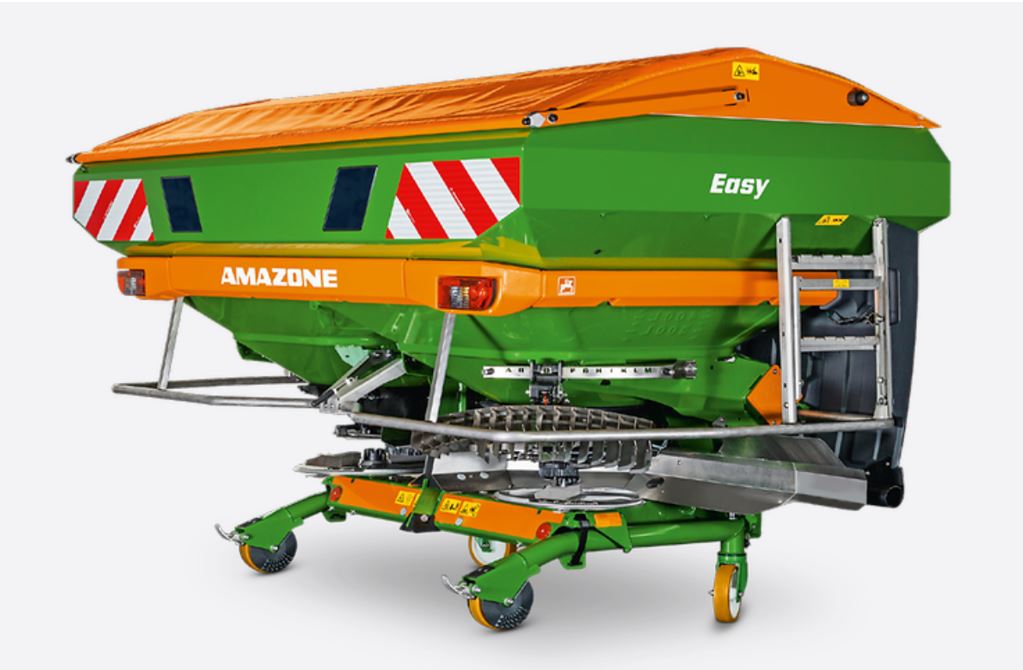 Is the ZA-V for you?

The ZA-V is the perfect match of technology and quality engineering. Amazone combined clever features like a one-piece hopper, a great cover and spreader wheels with smart technology like weight cells and section control to make this spreader a perfect match for grassland farmers.

When section control is combined with weigh cells and a GPS system, Amazone claims that the accuracy is 10%+ more than a more basic spreader. When you add this to the savings that the TAMS grant provides, it is a once-in-a-lifetime investment for any farmer.