A handmade natural sheep’s milk yogurt, produced on a Mayo farm, has made its way onto the menus of Ireland’s Michelin-star restaurants.

Michael and Aisling Flanagan are behind Velvet Cloud yogurt which uses just two ingredients: fresh sheep’s milk from their flock of Friesland and Lacaune ewes, and yogurt cultures.

They produce approximately 600L of yogurt weekly; which is mainly for sale through retailers in the west and in Dublin.

“Distribution is a huge challenge for a small chilled food business, but we have a food service distributor, which can supply the whole island,” he said.

Michael grew up on a dairy and sheep farm in Claremorris; while Aisling is a Dubliner, but spent most childhood summers on her grandparents’ farm in Cork. Michael inherited the current 65ac farm which was an out farm of the home farm – about eight miles on the other side of Claremorris. He rents a further 8ac.

This year they have milked approximately 200 ewes and also had about 50 regular ewes producing lambs.

In 2014, they produced some trial batches of yogurt and gave it around to some retailers and chefs to sample. The initial feedback was sufficiently positive to give them the confidence to give it a go.

“It was to a large extent a venture into the unknown; there was not any comparable product available in Ireland,” said Michael.

“I visited farms in the UK and received a lot of helpful advice from Henry Clifton-Brown, at the time he operated the largest sheep milking flock in Ireland,” he said.

“We set about establishing the business in 2013; but had difficulty initially sourcing quality dairy stock at the time because there were only two sheep dairy flocks in the country with large number of sheep and neither had any available to sell. 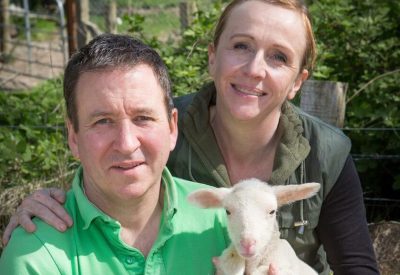 “We eventually sourced stock through Henry and abroad; but another obstacle we had to overcome was the lack of a ready source of knowledge as to how to manage a dairy sheep enterprise.

“Teagasc don’t have anyone or any information, so a lot of time was spent on researching the farming side of the business,” Michael explained.

Teagasc does, however, have an artisan food specialist and an adviser that provides support for milking goat herds.

The Flanagans went on to build a milking parlour and a small production facility.

They eventually got their licence to produce from Department of Agriculture in late June 2015. We produced and sold our first yogurt in July 2015.

“The yogurt making process commences in the afternoon when milk is heated to 90º, it is then cooled down to 40º at which stage the cultures are added and it is allowed to ferment overnight, about 10 hours in total. After this, the yogurt should be ready to pack,” he said.

The Flanagans employ two staff full-time – one on the farm and one on the processing side.

Their plan is to continue to develop the yogurt business in Ireland, attracting new customers as the word spreads on the benefits on sheep milk, which he said, has 70% more solids than cows’ milk.

“There are still a lot of customers in Ireland to be gained. Sheep’s milk is where goats milk was in this country 15 years ago,” he said.

I wouldn’t suggest people just decide to go into sheep’s milk production without first having a market. There isn’t a ready market for sheep’s milk unlike cows’ milk. For example, you can start milking any amount of cows’ milk and have a buyer straight away. There is also one large buyer of goats’ milk in Ireland, if you were considering milking goats.

“Anyone milking sheep must secure a market beforehand; either someone to buy their milk from them, or otherwise manufacture products themselves. From a farming point of view, it enabled us to diversify from traditional sheep farming.”

Many people buy the product because they are lactose intolerant; while, others are drawn by its artisan nature and the fact that it is produced on a family farm, Michael said.

The Flanagans also started cheese production this year; and  will continue to develop this enterprise – mainly during the summer months.