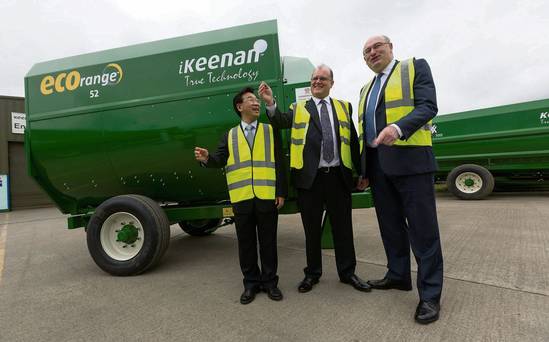 Roll out the red carpet as Keenan has signed a E15m machinery deal with a multimillion Chinese firm.

Richard Keenan & Co, based in Borris, Co Carlow, will export hi-tech feeding machinery to the Shanghai-based Yan, Hua, in a deal worth E15m following four years of work in the Far East.

Keenan produces feeding machinery and has also developed a computer programme named ‘Keenan Mech-fiber’, which promises to increase production by up to 25pc, knocking 20 cents from the cost of producing a litre of milk.

The system measures the amount of feed being used, and develops a dedicated programme based on the type of animal involved and best feeding mix to increase production.

Information on the exact type of feed and how it’s mixed and delivered is sent to the farmer electronically, meaning it takes just 2.5 seconds to arrive, and the system can be adjusted to improve output.

It means there is no over-feeding, keeping costs down, while animals will also receive the best possible feed which will result in higher yields.

Richard Keenan & Co currently employs 240 people, of which 170 are in Ireland, and exports 90pc of its products.