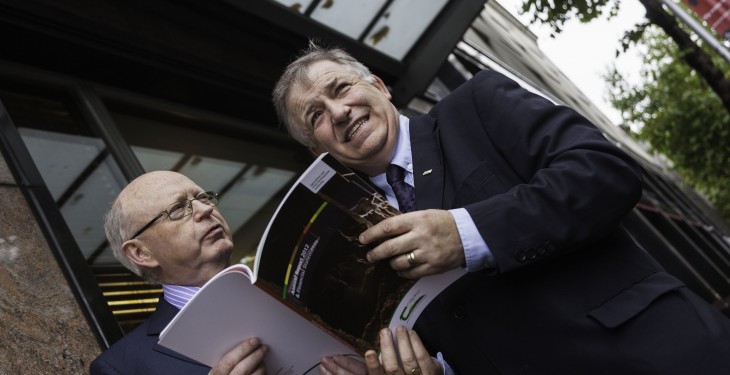 Grave concerns were raised over the future operation of many Teagasc advisory services by its director Prof Gerry Boyle and its chairman Dr Noel Cawley this afternoon at the publication of the Teagasc 2012 Annual Report.

Speaking at a briefing in Dublin, its chairman Dr Cawley stressed that the state advisory agency for the food and agriculture sector was “at the limit in term of how far it can stretch resources”.

During 2012, it received €134m from the Department of Agriculture, down four per cent the previous year. It also brought in funding from EU grants and private sources of €30m. Since 2008, Teagasc has reduced its offices from 90 to 52, generating income of €36m, which went to modernising existing facilities. “Teagasc is not about buildings, it’s about knowledge,” added Dr Cawley.

Teagasc director Prof Boyle noted the challenges it faces with regard to the “spectacular growth in enrolment” of its educational courses. Teagasc has seen a 144 per cent increase in enrolments since 2006. “There are huge challenges in trying to accommodate the extra students under the moratorium. The decision to safeguard education from moratorium has not been extended to agricultural education. This is significant.”

Prof Boyle explained that there has been a substantial drop in spending since 2008 due to the moratorium, a €26m reduction in the pay bill and staff numbers have fallen by 36 per cent. “The staffing issue is the most serious to organisations such as use due to specialisation of staff,” he added.

In terms of its front-line advisory staff at Teagasc, this has reduced from 400 to 250. “In many cases clients are not getting the services they want. We are very, very limited.”

Prof Boyle continued: “Teagasc is at the limit now in how far it can stretch resources. We are pushed as far as we can go. It will lead to difficult decisions…Food Harvest 2020 is important to us but there is a limit to how far you can push. Sooner or later services will be affected.”

When questioned on the difficult decisions ahead, Prof Boyle elaborated: “A lot will depend on if we can get approval for exceptional recruitment. If we don’t get approval and the number of enrolments continue to increase, we will have to consider capping enrolment.”

He noted the student-teacher ratio has gone up from 12 in 2006 to 20 now. “Agriculture education is very intensive and hands-on, 20 students per teacher is the limit. Staff are under pressure and we don’t want to lose quality.”

Prof said it has used outsourcing to overcome this but it has proven difficult.  “We might look at it in terms of advisory services,” he added, “But staffing is the constraint not funding.”

Asked if fees to farmers will increase to compensate the drop in funding and resources, Prof Boyle noted any increase will be modest. “Fees will increase. They are reviewed every year. They will be modest in our view. It will be a small fee increase, a small percentage.”

In terms of industry funding for advisory and other educational Teagasc staff, Prof Boyle said the agency does “build relationship with individual firms while still maintaining its independence”.

He said that industry funding at present provides up to 20 to 25 staff, but that as a whole, the agency needs 300 staff. “Co-ops are willing to part-fund advisors. The problem is getting sanctions.”

Meanwhile, Prof Boyle  also noted that 2012 was “a very difficult year for farmers”, which carried on into 2013 with the fodder crisis.

In terms of research, Prof Boyle said a “huge chunk of Teagasc’s activity focused on grassland production”. “Ireland known worldwide for its research in grassland management and genetic research. In addition our education programme hugely important. We have 2,500 in our colleges and 13 regional education centres, which caters for another 1,000 part-time students.”

In terms of its advisory services, Teagasc interacted with more than 42,000 farmers in 2012, who paid a fee of €11.5m for this service and up to 14,000 farmers are in its discussion groups. “Our research into dairy discussion groups showed that costs of production was 3c/l less for participants than non-participants,” Prof Boyle explained. “It’s not surprising farmers learn from each other.”

In terms of the commercialisation of its innovative sex semen trial with the Irish Cattle Breeding Federation, Teagasc said its role in the second stage of the project is limited. “It’s up to farmers now to purchase the semen. Our role was around research. We have no role in commercialisation,” Prof Boyle concluded.