Factories are looking for stock, he said, and are paying 470-480c/kg to secure supplies; the latter price is being paid to groups and those marketing larger numbers.

Despite the decline in numbers, spring lamb quotes continue to remain under pressure; most factories are now offering base quotes of 460-470c/kg (including QA bonuses) to secure supplies.

Kildare Chilling is offering a base quote of 460c/kg for spring lambs; a 10c/kg bonus is also available for QA stock.

Kepak Athleague is starting negotiations with farmers at 470c/kg (including of 5c/kg QA bonus) and the two Irish Country Meats’ plants are quoting an all-in price of 460c/kg (450c/kg + 10c/kg QA).

In addition, farmers are being offering 240-250c/kg for suitably-fleshed cast ewes.

Spring lamb numbers have continued to decline. Official figures, from the Department of Agriculture, show that some 65,158 sheep were slaughtered in approved sheepmeat export plants during the week ending September 17.

When compared to the week before, that’s a drop of 1,464 head or 2.1%. This reduction is largely due to a decline in spring lamb and hogget numbers.

In addition, the drop in supplies could also have occurred as many farmers opted to head to the National Ploughing Championships in Screggan, Tullamore, Co. Offaly, last week.

Figures from the department show that spring lambs numbers declined by 179 or 0.3% on the number witnessed during the week ending September 10. In addition, hogget throughput dropped by 20%.

Cast slaughterings (ewes and rams) also dropped by 1,252 head or 9.1% during the week ending September 17. 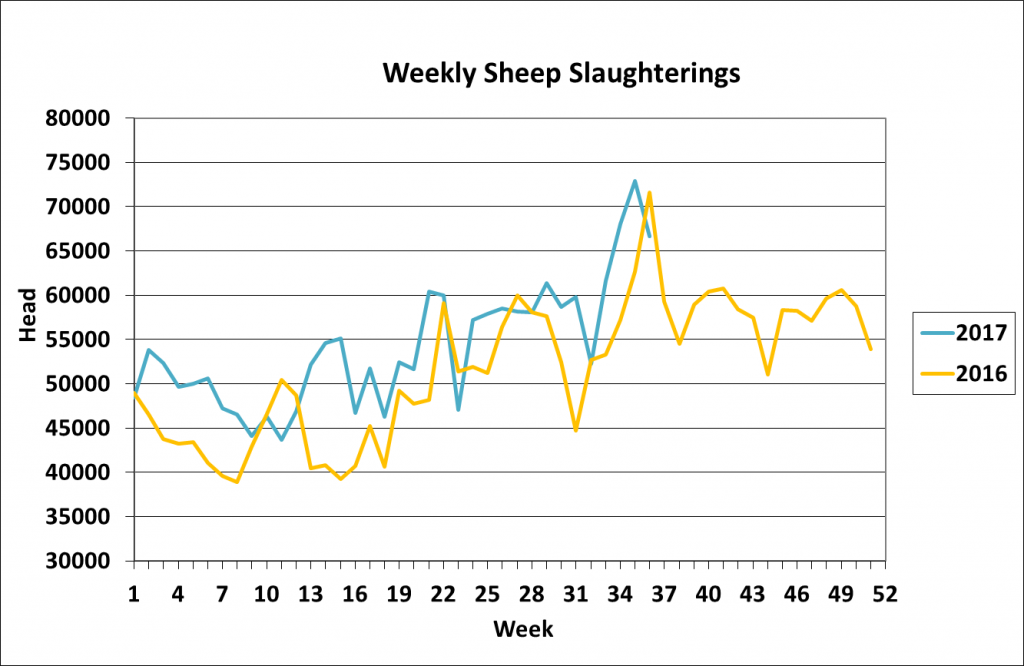 Lynskey also touched on lamb prices in the UK, where the AHDB reports that an average price of 404p/kg (483c/kg) was achieved during the week ending September 17.

Lynskey said the change in sterling back to 88-89p for €1 has made a significant difference.

“This should also slow down imports from Northern Ireland into the factories in the south,” he said.

Heritage week: ‘Have a different day on the bog’

Time to start getting your farm winter-ready