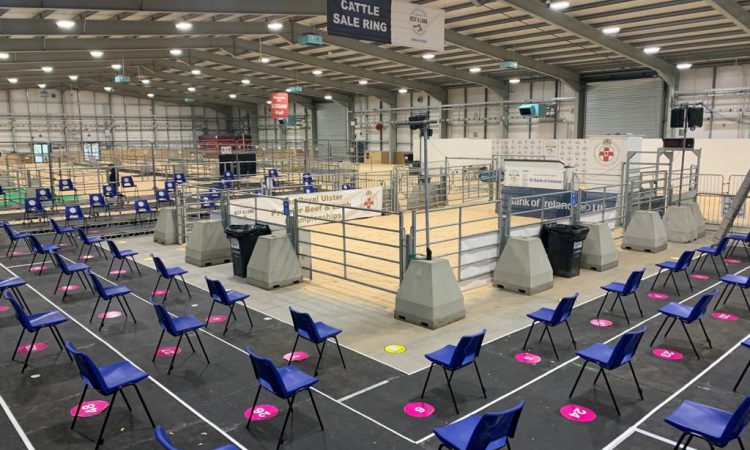 A pair of Spotted Dutch-cross ewe lambs took the major honours in the sheep ring at this week’s RUAS Beef and Lamb Championships. Bred and exhibited by Tommy Jackson and his wife Zoe, they went on to make £660 each in the sale ring.

“They are out of a black Vendeen ewe, which was crossed with a Spotted Dutch ram,” Tommy explained.

“They are completely black in colour. Black lambs are now coming back into fashion. A second pair of Spotted Dutch-cross ewe lambs from my own flock, again totally black in colour, made £440 each at the sale.”

Commercial flock in Co. Down

The Jacksons run a commercial flock of 250 ewes on their farm, near Saintfield in Co Down. They recently imported a pure bred Spotted Dutch ram and an accompanying ewe.

Spotted Dutch sheep have been recognised as a breed in their own right for the past 50 years. There are now about 1,000 pedigree flocks in countries across Europe. Most are located in the Netherlands.

The sheep are noted for their ability to thrive on grass and to produce carcasses with exceptional meat yields.

In addition, they are easy lambing with ewes able to produce large volumes of milk. Mature females will weigh up to 95kg with rams getting up to 135kg.

Noted Hampshire Down breeder Kevin McCarthy, from Comber in Co. Down was another exhibitor at this week’s RUAS Beef and Lamb Championships. However, his mind was equally focused on highlighting the export opportunities that are now arising for ovine semen produced in Northern Ireland.

He commented: “There is currently a tremendous demand for sheep semen produced in the UK from flock owners in New Zealand, Russia and in countries right across South America.

“There has been a tremendous amount of work carried out to maximise this potential by British Livestock Genetics and UK Technology for Agriculture and Genetics, or UKTAG.”

According to Kevin, the first integrated livestock and genetics export promotion strategy was introduced on behalf of the UK sheep industry in 2018. It brought together a range of stakeholders, including the Agriculture, Horticulture and Development Board (AHDB) and the Department of International Trade (DIT).

“The National Sheep Association is also involved. Pedigree sheep breeders in Northern Ireland are set to benefit particularly from this initiative as they are the only flock owners in the UK who can verify that they have been free from scrapie for the past seven years,” Kevin added.

Freedom from scrapie on this basis is a critical factor when it comes to determining the eligibility of semen exports to countries like New Zealand and Brazil.

“I have already sold semen to New Zealand and will be travelling to Brazil as soon as the Covid-19 restrictions are lifted,” he added.

Kevin McCarthy also indicated that a number of other pedigree sheep breeders in Northern Ireland are involved in this export campaign.

“Semen exports represent a genuine business opportunity for pedigree sheep breeders across Northern Ireland into the future,” he concluded.