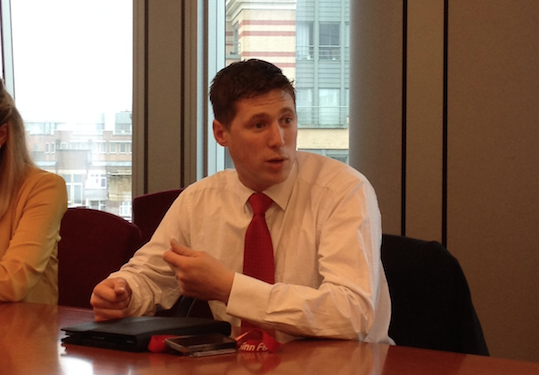 The recent Parliamentary elections saw Sinn Fein secure seats in the European Parliament in every constituency on the island of Ireland.

From a rural policy perspective they feel that “rural Ireland is under attack”, and is seeing a reduction in public services and post offices. Investment in infrastructure and services has been directed away from rural Ireland they said.

Matt Carthy, from the Midlands-North-West constituency has been appointed to the influential Agriculture & Rural Affairs committee. Maintaining the viability and number of farmers in his constituency is a priority, he says, and while he welcomes Simon Coveney’s CAP proposals “up to a point”, he would like the Minister of Agriculture to pursue a greater adoption of the flat rate payment system as has been done in Northern Ireland. Carty sees Sinn Fein championing the cause of small to medium sized farmers. He outlines the his key priorities on the Agriculture and Rural Development committee;

On the issue of ‘nomad’ cattle, Carthy’s Northern Ireland colleague, Martina Anderson, MEP was much more forceful. Given the fact that we have an island health strategy, the behaviour of the factories and the levying of penalties was absolutely shocking she said. Anderson feels that Minister Coveney is “not putting his shoulder to the wheel” on this issue. She added that Northern Ireland Agriculture minister, Michelle O’Neill has found it hard to get Simon Coveney to engage on this issues.

Dublin-based MEP, Lynn Boylan is an ecologist by profession and was delighted to be appointed to the Committee on Environment, Public Health and Food Safety. She would like to see a body set up to act an early warning system for “Food Fraud”. Boylan feels that the horse meat scandal would have been picked up much earlier if their was a body where all stakeholders could feed in information without repercussion to help detect potential food health issues in the food chain before they spiral out of control.