Significant amount of farmland flooded, as rivers are closely monitored 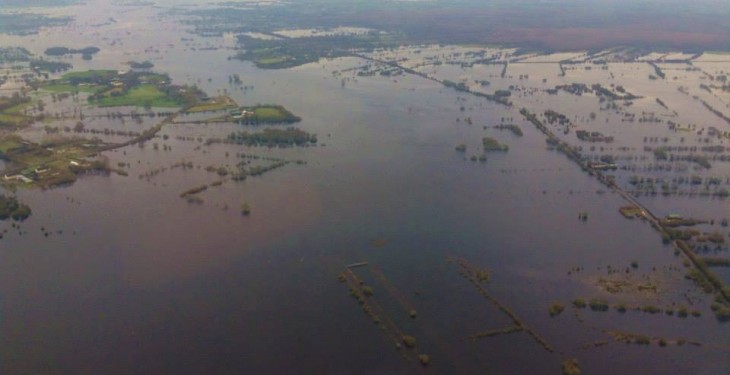 A significant amount of farmland across Ireland is currently under water, particularly land close to rivers, as all the main river levels are being closely monitored. This is according to Sean Hogan, chairman of the National Emergency Co-ordination Centre, which met today in Agriculture House on Kildare St in Dublin this afternoon.

Briefing the media he said: “The group met this morning to access the impact of the recent weather and also to consider further threats emerging in the weather.”

He added: “Because it has been raining pretty much for the past two months water levels in rivers around the country are elevated.” Addressing the impact on rural areas he said: “I am sure there are significant amounts of farmland under water. However the figure hasn’t been quantified yet.”

Hogan identified that river levels would not help the situation, but was not in a position to confirm which rivers are particularly under threat. However a representative from the Office of Public Works said: “The Shannon is always on the radar. All the main river systems are being closely monitored.”

Hogan was keen to stress that people should keep an eye on what is going on in locally in their area. He said: “While we may be able to predict generally where rainfall with occur. The rainfall in certain areas can cause flooding and won’t be seen by any warning system.”

He said: “Practically all rivers are at an exceptionally high level at the moment. This is on the back of a hell of a lot of rain, which has fallen in the last two months. The events being predicted over the coming week while they might not be very big. It could tip things over the edge in certain areas.”

At the briefing Gerry Fleming of Met Eireann outlined the situation from a meteorological point of view. He said: “If we look at what has happened in recent months we have had a very wet and windy period. The storms themselves have not been particularly extreme. But they have coincided with unusually high tides.

According to Fleming: “The tidal highs are falling away now. However the rivers have become very high in the past few months.”

He said: “What we see in the weather of the next few days is very little change. One weather system after another will bring more and more rain. We do foresee that the river levels will continue to rise and river flooding will become more of a problem.”

Image: An aerial view of the Midlands taken by the Irish Air Corps shows the extent of the flooding at Ballinasloe and Athlone. (Irish Air Corp Facebook page)