Consumers spent €92m more over the Christmas period compared to 2015

This represented an increase of 3.8%, the report for the 12 weeks ending January 1 2017 revealed.

The increase in sales was helped by the fact that Christmas Day fell on Sunday in 2016, meaning shoppers had two extra days to tick off all the items on their shopping lists, according to Kantar.

Figures show that the average household spent €193 on the big day, €35 more than last year.

Meanwhile, Friday, December 23, was revealed as the busiest days for retailers as 55% of the population visited supermarkets around the country.

After a turbulent 2016, shoppers chose to treat themselves this Christmas, Director at Kantar Worldpanel David Berry said.

Always popular over the festive period, biscuits and chocolates did even better than usual.

“Irish families spent 9% more on seasonal confectionery than last year, making sure they had plenty of sweet treats to keep them going over the festive period.

“More were in the mood for a Christmas tipple too, with alcohol experiencing double-digit growth. This was partially down to more multi-buy promotions in stores tempting shoppers to up their spend.”

The festive period is a vital time of year for grocers, as shoppers are willing to spend more, and represents an opportunity to pull away from the competition, he said.

“Whether that’s via a heart-warming Christmas ad or the best premium own-label offers for the big day, we’ve seen retailers going all out to persuade the Irish public to shop with them this festive season,” he said.

All of the big five retailers enjoyed sales growth as 2016 came to a close, figures show.

“It was Supervalu that came out on top after a tussle with Dunnes Stores at the end of last year, a position the retailer has held for 10 out of the past 12 periods,” he said 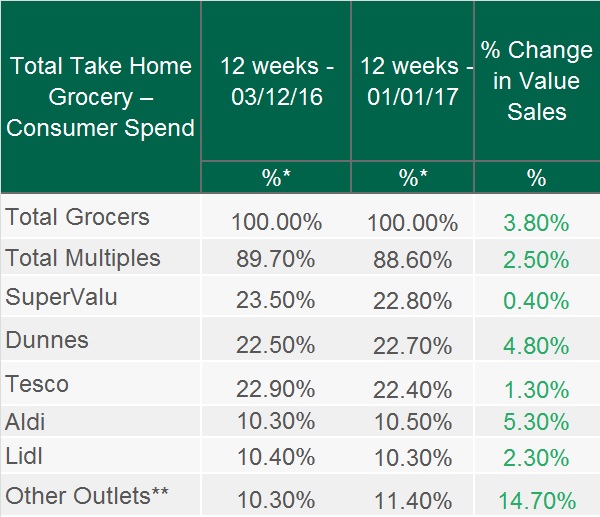 Figures show that Supervalu leads the way holding 22.8% of the market share, a fall of 0.7% compared to the beginning of December.

Dunnes Stores returned to second place, recording a market share of  22.7% as sales for the Christmas period were almost 5% higher than in 2015.

The average spend per trip in the supermarket reached a new high of €41.60, significantly ahead of any other retailer, according to the Kantar report.

In the final quarter Tesco sales grew by 1.3%, with its Tesco Finest range recording strong growth over the festive period.

Elsewhere, Aldi posted the strongest growth of all Irish supermarkets with sales up by 5.3%.

The retailer managed to attract 37,000 new shoppers this Christmas, boosting its market share to 10.5%.

Lidl also recorded positive results, with sales over the Christmas period 2.3% higher than in 2015.