The association representing game hunters has said that a judicial review in the High Court has determined that rough shooting was not a breach of ‘Level 5’ Covid-19 restrictions, provided it took place within 5km of the home.

Following an announcement at the end of October that pheasant shooting would be banned as part of Level 5 restrictions, the National Association of Regional Game Councils (NARGC) took up the matter with the Garda Commissioner and other authorities.

The association said in a statement today (Tuesday, December 15) that it “did not receive any satisfactory response”, and subsequently instructed its lawyers to commence judicial review proceedings in the High Court in the name of a Co. Tipperary farmer and game shooter.

The case was first heard on November 9, and was adjourned until December 8. The NARGC says that, just before the case was due to be heard on that day, it was informed that the State “intended to make a proposal to resolve the issue”.

That proposal was read out in court today, in which – according to the NARGC – the state confirmed an individual who engaged in lawful rough shooting for the purpose of exercise on their own during Level 5 restrictions did not contravene temporary restrictions under health laws, provided the individual complied with those restrictions, including the 5km limit.

Following the case, the NARGC said: “The effect of the State’s confirmation is that it has accepted that if, during Level 5 restrictions an individual engaged on his or her own in lawful rough shooting, for the purpose of exercise, within 5km of home, he or she was not in breach of the Covid-19 regulations.”

The State agreed to make a contribution towards the NARGC’s legal costs, the association said.

“Level 5 is of course now over, but it may be reinstated at some time in the future. If it is reinstated, the association believes that the confirmation provided today can be taken as guidance for the future,” the NARGC added.

“We would like to thank all our members for the restraint shown during the unfortunate and unacceptable shooting ban,” the association’s statement added. 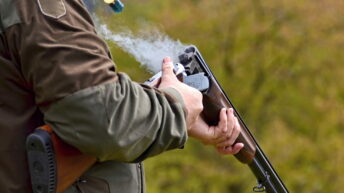 Anger over ban on game hunting during Covid-19 restrictions