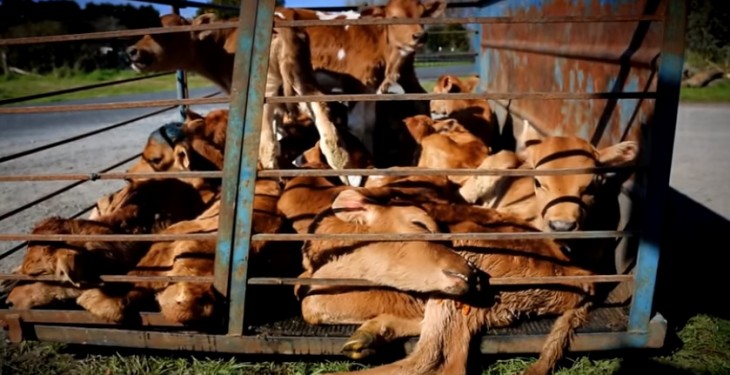 An investigation by New Zealand animal rights group SAFE has put the country’s dairy industry under the spotlight.

SAFE is calling on New Zealand and international consumers to ditch dairy following an explosive investigation into animal cruelty in the New Zealand dairy industry by Farmwatch and SAFE.

Filmed by hidden cameras, footage shown on TV ONE’s Sunday exposed the dark side of the New Zealand dairy industry.

Filmed at numerous locations, the footage shows that cruel treatment of calves is commonplace.

According to the group, over 2m unwanted male calves, referred to as ‘bobby calves’, are killed each season at only four days of age.

“Bobby calves are basically regarded as trash. They are literally left like rubbish, to be picked up at the side of the road. They are just waste products to the industry and are treated accordingly. These animals pay a heavy price for our insatiable appetite for dairy – and massive industry profit.”

Please be advised that the footage in the below video contains disturbing images.

Dairy industry bodies say they are appalled at the bobby care practices revealed in video footage.

DairyNZ Chief Executive Tim Mackle says cruel and illegal practices are in no way condoned or accepted by the industry as part of dairy farming.

“We are shocked and farmers are too,” he says.

“We will be asking questions of everyone involved. Farmers don’t see what goes on when calves leave their farm and we need to be holding the transport operators and processing plants to account to ensure bad practices get stamped out of our industry.

“Our surveys show that 95% of farmers are compliant with all animal welfare codes and they take great care of their animals including calves. We obviously want to see that even higher because the dairy industry takes its animal welfare responsibilities seriously and we are committed to farming to high standards,” he says.

“There is a range of industry initiatives already in place and we will be boosting our actions with other groups to ensure the care of calves.”

He says the footage released by SAFE and Farmwatch includes some appalling behaviour, by a minority of farmers but also by transport companies and slaughterhouse workers.

“This is something we and the industry will not tolerate.

“Federated Farmers strongly, and each season, reinforces to its members that the highest standards of animal welfare must apply when dealing with all calves. The federation will also put resources behind any industry initiatives to review the handling, transport and processing of bobby calves,” Hoggard said.

“These codes are internationally recognised as robust. Where there are breaches we fully support and expect Ministry for Primary Industries’ compliance action,” she says.