The last week-to-10 days has seen the lamb trade come under pressure, which has seen factory prices tumble below the €5.00/kg mark.

The drop off in factory prices, coupled with the temporary closure of Kildare Chilling due to a coronavirus outbreak last week, has seen the tables turn quickly in what was a very positive July for the sheep trade – which saw prices of up to €5.70-5.80/kg achievable at times for lambs.

In terms of quotes, due to the outbreak of the coronavirus at Kildare Chilling, a contact from the meat processing plant said that there would be “no kill on Monday or over the next few days”, which wipes them off the table for the moment.

Also Read: No sheep kill 'for the next few days' at Kildare Chilling

Furthermore, Kepak Athleague was not quoting on Monday or Tuesday of this week for lambs or ewes.

At the moment, only Irish Country Meats has a quote on the table for lambs and ewes.

Since buying came to a halt for the Eid al-Adha festival just under two weeks ago, quotes for lambs have been in free fall, with prices back as much as 50c/kg.

Going by reports, farmers involved in producer groups or those with numbers on hand are securing top deals of between €5.00/kg and €5.10/kg, with some suppliers reportedly securing deals as high as €5.20/kg.

Over the weekend, it was reported that deals as much as €5.30/kg were achieved in account of “very tight supplies”.

Advertisement
“Uncertain” is the word that processors are using to describe the sheep trade at the moment.

However, over the last few weeks, a huge number of sheep have gone through the system and it was widely seen in marts across the country that farmers drafted lambs at lighter weights to take advantage of strong factory prices.

Speaking to farmers over the weekend, the majority said that they had taken advantage of good factory prices during the month of July and in early August and had moved lambs on sooner than what they would have done last year.

Therefore, as of now, the drop off in factory prices over the last fortnight haven’t hit them hard due to the fact they moved lambs on quicker. However, those that have lambs ready for the factory are now are facing into tougher market conditions.

Cast (ewe and ram) supplies at the Department of Agriculture approved sheep export plants stood at 7,350 head – a decrease of 1,118 head – for the week ending August 2.

Moreover, overall supplies increased by 2,962 head during the week ending August 2 and amounted to 77,304 head. 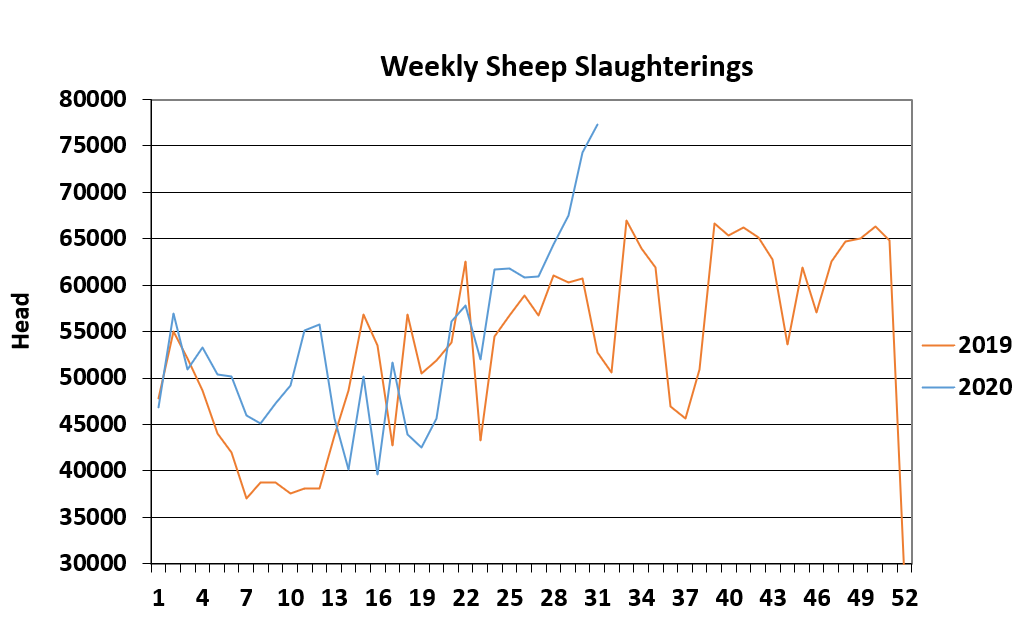