Sheep Focus: A preview of what’s on offer at the Big Boy Ram Sale next week 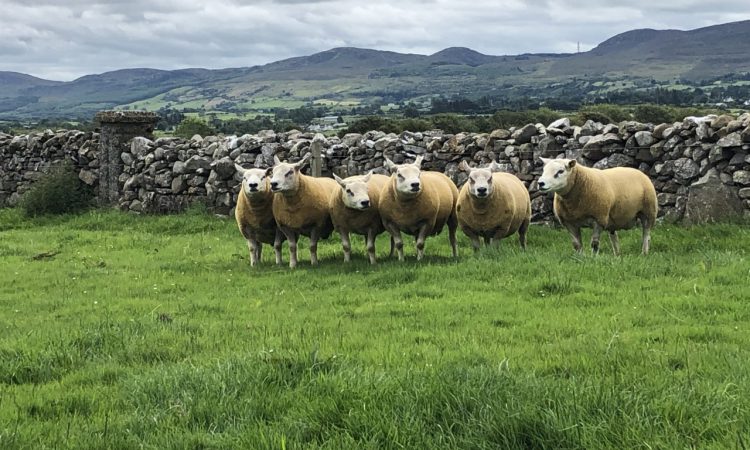 The Big Boy Ram Sale, which is heading into its third year of existence, is set to take place next Friday, August 7.

The sale is taking place in the same location as last year – at The ShowGrounds – in Carrick-on-Shannon at 6:00pm.

On the day, there will be 122 rams from 11 different breeds up for grabs from breeders located in various parts of the country.

To get a bit of background on the sale, AgriLand met and spoke to the chief organiser of the sale, Stuart Dorran, from Dromard, Co. Sligo.

He said: “This sale is all about quality. We are very strict about what rams are presented. The term ‘grass-fed’ can get thrown around a lot, but the rams that have been at this sale for the last two years, and the ones on offer next week, are predominately grass-fed.

Obviously, the breeders, including myself, have been supplementing the rams a small bit of meal a month before the sale to just give them that extra bit of spark.

“The rams that will be on offer next week come from good breeding backgrounds. They are out of good-quality rams themselves that would have been worth €1,000-8,000.”

Breeds of rams on offer this year:

Stuart added: “The aim of this sale is to offer predominantly grass-fed rams that are suitable for commercial farmers, so that they can buy a ram – that they can run with their flock of ewes – that will produce lambs of good-quality and that will kill-out well.

We don’t want to see heavily-fed rams coming and – if they do – we won’t have them back again, because in many cases these well-fed rams won’t perform to a high-level.

To see what type of rams will be on offer on the day, AgriLand paid a visit to seven different farms that, in total, had nine out of a possible 11 breeds ready for the upcoming sale.

Farming in Dromard, Stuart, alongside his father, runs a mixed enterprise of dairy and sheep. The Dorrans are currently milking 50 British Friesian cows, alongside their ever-growing flock of pedigree sheep.

The 25-ewe flock consists of three different breeds. These include: Suffolk; Texel and Chartex.

Lambing takes place in March/April. The lambs are creep fed for two months and then weaned at 10-12 weeks. After that, they are on a grass-only diet. Stuart said that the rams that he breeds are “reared naturally”.

Furthermore, new bloodlines are introduced to the flock every year or two.

Stuart, who has presented rams at the upcoming sale over the last two years, has six rams ready for next week’s sale. He will be presenting five shearling Chartex rams and one Texel ram on the day.

Philip Crowe runs a mixed enterprise of cattle, sheep and pigs in Co. Cavan. He is set to bring five rams to the sale next week.

The last two years, Philip has secured the top price at the Big Boy Ram Sale for his Blue Texel rams.

He has bought rams overseas from the UK and France over the last few years in an attempt to find the “top bloodlines”.

James Dunne, alongside his father John, runs a mixed enterprise of 35 suckler cows and sheep.

Advertisement
The duo run both a commercial flock of 120 ewes and a pedigree flock of 35 Texel ewes. However, the plan is to move up to 60 pedigree Texel ewes in the near future.

James and his father have been breeding pedigree Texels for the past six years and – in the last three years – they have delved into breeding Aber rams as well, which are a cross of a Bluefaced Leicester and Texel.

The plan is to continue to grow the pedigree side of the business, with a real focus on breeding rams that are suitable for the commercial farmer.

James is set to include 10 rams in next week’s sale. These include: five Texel ram lambs; four shearling Aber rams; and one shearling Texel ram.

Jonathan Workman, alongside his father Malcolm, runs a mixed enterprise of cattle and sheep in Co. Monaghan.

The Workmans have been breeding Rouge de l’Ouest sheep for the past 30 years, while over the last couple of years they have started to breed Blue Texel and Dutch Spotted sheep as well.

The duo buy in rams from Holland and Belgium. The Blue Texel and Dutch Spotted rams that will be on offer next week are out of imported rams.

The father-and-son team plan to bring 10 rams to next week’s sale. The breakdown of what they are bringing is as follows: six Dutch Spotted ram lambs; two Rouge de l’Ouest rams; and two Blue Texel rams.

Alongside their pedigree ewes, they also run a flock of crossbred Suffolks and “horny-type ewes” on their 46ac block of land.

The pedigree flock was established in 2011, when the duo purchased six Suffolk ewes. Over the last nine years or so, the pedigree side of the business has steadily grown to 50 ewes.

Garth and Alison have bought sheep overseas and up in Northern Ireland over the last few years in order to bring in new bloodlines into the flock.

The Grahams are set to bring two Suffolk ram lambs to the sale next week.

David Argue, alongside his father, runs a mixed enterprise of cattle and sheep in Co. Cavan.

The duo run a flock of 120 commercial ewes along with 35 pedigree Charollais ewes.

The plan was to bring a couple of rams to the sale next week; however, after receiving a few calls about his rams he ended up selling a few privately off-farm.

Therefore, as of now, he only has two Charollais rams ready for next week’s sale – a shearling and ram lamb.

Last weekend, David had a very successful day out at the Charollais Premier Show and Sale where his ram lamb, Rockdale Vespasian, sold for a record breaking price of €7,500.

According to David, he was the best lamb ever bred on the farm. The ram was snapped up by two breeders from Northern Ireland.

Note: The video (below) only contains footage of the shearling Charollais ram.

Farming just off the coast of Co. Sligo, near Enniscrone, Emmet Sweeney operates a mixed enterprise of pedigree Angus cattle and a commercial and pedigree flock of sheep.

He has been breeding Aber rams over the last five years, which are a cross of a Bluefaced Leicester and Texel.

According to Emmet, it was by accident that he ended up breeding Aber sheep. He bought a purebred Bluefaced Leicester ewe that was in lamb to a Texel ram.

However, he is glad that she was in lamb, as he has grown that side of the business steadily and feels that Abers have a number of “excellent traits that commercial farmers are always on the lookout for”. 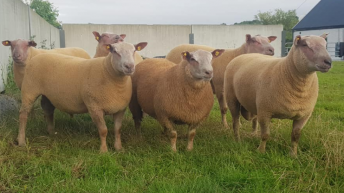